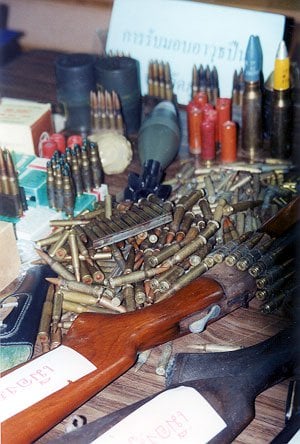 PHUKET TOWN: The amnesty for handing in unregistered guns and ammunition expired at the end of yesterday. The final tally of weapons handed in or found during the amnesty period was 18 firearms, four explosive devices and more than 7,000 rounds of ammunition. By district, the numbers were: Phuket Town: 10 firearms, 1,300 rounds of ammunition, four explosive devices. Kathu: Three firearms and 5,807 rounds of ammunition. Thalang: Five firearms and 121 rounds of ammunition. The total includes 100 rounds of assault rifle ammunition and two mortar shells found during repair work in a house in Phuket Town. (see https://thethaiger.com/news/index.asp?Id=3158 ) Phuket Provincial Police Deputy Commander Pol Col Apirak Hongtong, vowed that searches for illegal weapons will be stepped up. “We will check for illegal weapons every day and every night to ensure Phuket’s security,” he said He also reported a worrying trend – the adaptation of air guns to fire live ammunition. Investigations into their production and sale – apparently for as little as 500 baht – are continuing.

Patong gears up for polls – again