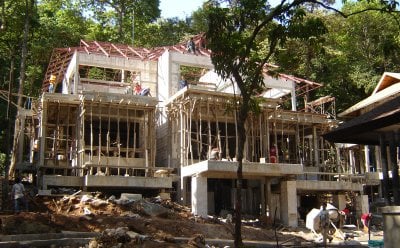 NAI HARN: Two construction foremen were arrested and their equipment seized on Wednesday in a raid by forestry officials on a resort complex being built illegally on protected forest land above Baan Krating Jungle Beach at Ao Sane, accessible from the road that runs through Le Royal Meridien Phuket Yacht Club.

The raid was carried out by 30 volunteers and officials from the provincial Forestry Department office and Muang District Office after a tip-off.

Officials are now trying to identify who ordered the construction at the site, which has 12 buildings in various phases of completion.

In the police report, the area of encroachment was listed as 9 rai, 2 ngan.

The Forestry Department valued the land at a total value of 648,000 baht.

Virot and Viriya were charged with violating Article 54 of the Forestry Act of 1941, Article 14 of the Forest Conservation Act of 1964 and Article 360 of the Penal Code. They were taken to Chalong Police Station for questioning and later released on bail.

Muang District Chief Administrative Officer (Palad) Techin Weerawong said that the Tambon Rawai Administration Organization would be held responsible for following up the case, as the area of the encroachment falls under its jurisdiction.

“The important thing is that all local people play a part in the long-term conservation of our forest reserves. I don’t want the forests of Phuket to suffer the same fate as those in Central and Northern Thailand,” he said.

Valentino and wife released on bail