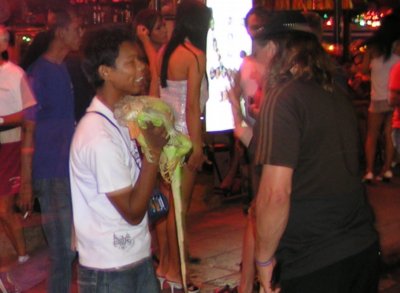 PHUKET: A Syrian tourist was stabbed in Patong on Tuesday night after an argument over an iguana turned ugly. Four Thai men were later arrested and charged for the stabbing and face charges of assault and grievous bodily harm.

According to Patong police, four iguana handlers ganged up on Mohammed Imed Arab, 20, after he got into an argument with one of the handlers on Soi Crocodile off Bangla Road.

Police said the Syrian refused to have his picture taken with an iguana when he was approached by one of the handlers. The situation quickly escalated into an argument, which was exacerbated by the language barrier and aggressive body language on both sides.

During the altercation, three other iguana handlers went to assist their friend and the Syrian was stabbed in the right side of his torso with a pocket knife.

The victim escaped his assailants by running into a nearby bar, where staff called police and paramedics.

Mohammed was taken to Patong Hospital and released earlier today.

The four male iguana handlers aged between 18 and 21 years old were arrested later that night in the Patong area. The four admitted to the attack and are due to appear in court to face charges.