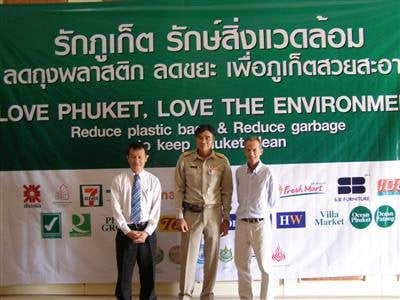 PHUKET CITY: In a bid to deal with Phuket’s waste management crisis, the island’s top retailers have agreed to start charging customers for plastic bags from December.

In a meeting with government officials at Phuket Provincial Hall on Monday, the retailers’ representatives agreed to the move, saying they are prepared to sign a memorandum of understanding (MOU) on the issue.

Under the plan, shoppers would pay one baht for a plastic bag with a five-liter capacity or less, and two baht for larger bags.

Exact details and specifications will be finalized before the MOU signing ceremony scheduled for December 4.

The campaign has been dubbed the ‘Keep Phuket Clean, Keep Phuket Green’ initiative.

It follows an effort launched in June to encourage Phuket residents to switch from plastic to re-usable cloth bags.

It was hoped the project launched in June would reduce the volume of plastic waste sent to the incinerator at Saphan Hin by 60 percent, or 5,000 tonnes annually.

The actual results fell far short and the program had a minimal effect in breaking the island’s addiction to polymer packaging.

At present, only about 40 percent of the total garbage trucked to Saphan Hin from all over the island can be incinerated. The remainder must be ‘landfilled’ in the low-lying area around the incinerator.

In June 2007, toxic liquid waste from the landfill leaked into the surrounding mangrove forest and killed millions of farmed fish.

The landfill has also created a stench in the nearby Ban Saphan Hin Village.

Charging people a few baht to try and reduce this figure makes sense, he said.

“It will help people to realize what a burden all this plastic is to the environment and will obviously encourage them to reduce dependence,” he said.

Mr Anthony said, “This is a project which aims to benefit Phuket in many different ways. It aims to reduce plastic as the start of an overall garbage reduction campaign in Phuket.”

“We will also promote this idea to schools so that when kids grow up they will be aware and understand that garbage is an important problem for our community. In the long term, we will be more aware and think before we throw away,” he added.

He encouraged everyone to play their part by using fewer plastic bags.

“This will allow us to maintain Phuket as the ‘Pearl of the Andaman’,” he said.