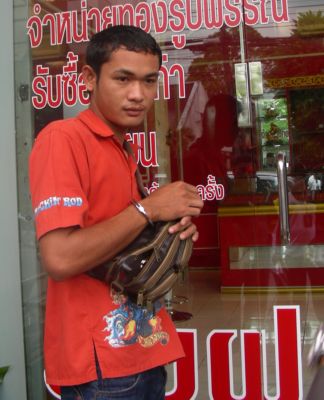 Lt Col Wijak Tarom of Phuket City Police told the Gazette that the robbery was recorded on the shop’s CCTV system, clearly showing Taweesak brandishing a handgun and demanding money.

After being handed 130,000 baht in cash, Taweesak made his getaway on a motorcycle parked outside the shop. Police were able to identify Taweesak as he was not wearing a helmet during the robbery, Lt Col Wijak said.

“A warrant was issued on March 4 for his arrest on charges of robbery, using a motorcycle for his getaway and carrying a loaded gun in public. He was arrested at his home in Tambon Tha Song Khon in Maha Sarakham Muang district,” he added.

When police entered the home, they found Taweesak carrying his 19-day-old daughter with his wife at home.

“He had called Maha Sarakham police many times and talked about giving himself up, but we finally decided to have him arrested at his home,” Lt Col Wijak said.

“He confessed to all the charges. He said he did it to pay for the hospital bill for his daughter’s birth. He also used the money to take care of his mother, who is sick, and to give to his father-in-law as a dowry for his wife.

“He cried while he told us this and said that he knew he did wrong,” Lt Col Wijak added.

“In Phuket, he delivered drinking water for the Sriwalee company in Rassada. He needed the money… so he decided to rob a gold shop.

“After the robbery, he took a bus with his wife to Bangkok, where his mother took his wife to the family home at Maha Sarakham. But Taweesak went to Rayong, where he hid at a friend’s house. He returned home on March 25, the day his daughter was born,” Lt Col Wijak said.

“We found the gun used in the robbery in a deserted house behind Phuket Rajabhat University. It was a fake plastic one, so we must change the charge against him to robbery using a fake gun,” he added.

Meanwhile, two other high-profile gold shop robberies in Phuket remain unsolved, that of Srithong Gold Shop and Thongroj Gold Shop, both on Chao Fa East Rd. Police have released sketches of the suspects but have yet to make arrests.