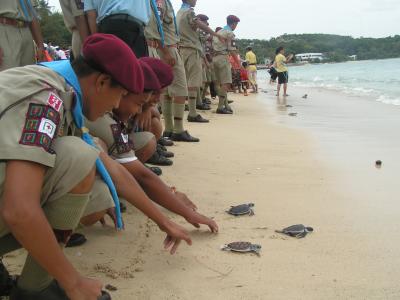 CAPE PANWA: More than 300 baby green sea turtles were released into the sea at the Third Naval Area Command, Cape Panwa today (August 12) as a way of celebrating the birthday of HM Queen Sirikit, which is also Mothers’ Day in Thailand.

Students from schools in the Panwa area helped naval officers, municipality officers and staff from local resorts to release 337 turtles which had been raised at the Turtle Preservation Center of the Third Area Naval Command in attempts to re-establish dwindling turtle populations in the region.

The turtle release was led by Admiral Supot Prueksa of the Third Naval Command and began at 10 am with a ceremony to honor HM Queen Sirikit.