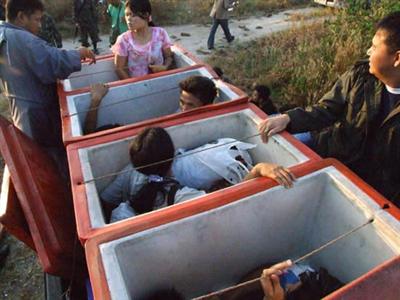 PHUKET CITY: Immigration Police in the early hours of Saturday arrested 34 illegal Burmese immigrants and two Thais in a raid on a house in Ranong’s Muang District, seizing notebooks listing the names of members of security forces who had allegedly been bribed to secure safe passage for the migrants.

At 4am, a team of Ranong Immigration Police led by Chief Inspector Nachathakrit Pinpak and supported by army soldiers arrived at a house in Tambon Bang Rin belonging to Khongsak Aduldechakul, suspected of involvement in human smuggling.

Immigration Police received intelligence that the house was being used as a way-station for migrants being taken to find work further South.

Outside the house, they found two pickup trucks with 34 Burmese packed inside.

At another house nearby, police arrested Mr Khongsak and seized a 9mm pistol with 48 rounds of ammunition. They also confiscated drug paraphernalia.

Mr Khongsak and his wife Wilailak confessed that they had helped Burmese immigrants to illegally enter Thailand. At the time of their arrest they were preparing to drive the two trucks to Phang Nga and Phuket, police said.

Scores of unregistered Burmese work openly in labor camps and rubber plantations in Phuket, but getting them here from the border is a cat-and-mouse game with officials who have jurisdiction over the various districts through which they must pass en route to the resort island.

The extent of the smuggling racket made international headlines in April last year, when 54 Burmese suffocated to death in the back of a truck while on their way to Phuket.

A migrant arrested in the raid, 25-year-old Mu Mo Saw, said that she was on the way to Phuket when arrested. She had paid 10,000 baht to a Burmese agent in Kawthaung to be taken to Phuket, she said.

The couple were charged with aiding and abetting illegal immigrants, then sent to Ranong Hospital to be tested for drugs before being handed over to Ranong police.

At the time of writing, results of the drug tests were not available.

Lt Chalermphol Thehopakan, commander of the soldiers who allegedly served as backup in the operation, said the couple were the leaders of a large human smuggling network based in Ranong.

“In Mr Khongsak’s house we found notebooks containing names and contact details for members of the network and schedules for when workers would be smuggled to other provinces. [The notebooks also contained] a list of names of officers that Mr Khongsak had paid to secure safe passage. The list clearly stated the names of officers of all levels, from NCOs to senior officers. The books will be passed on to the relevant authorities for further investigation,” Lt Chalermphol said.

Ranong Immigration Police have now passed the notebooks on to the Department of Special Investigation (DSI) for follow up.

A southern regional police spokesperson said his office had not yet received a report of the incident, but would take decisive action if evidence emerged that officers in the region had been involved.

A source in the security forces said that Mr Khongsak’s network was the 12th largest of 15 major people smuggling networks known to be operating out of Ranong.

The network moved around 500 migrants a month to provinces around the South. The network had been operating for more than 10 years and had been able to avoid closure as Mr Khongsak had links with officers at every level of the security forces, the source said.

The source did not reveal what led to Mr Khongsak finally being arrested.

The arrested migrants were taken to Ranong Immigration to be charged and deported.