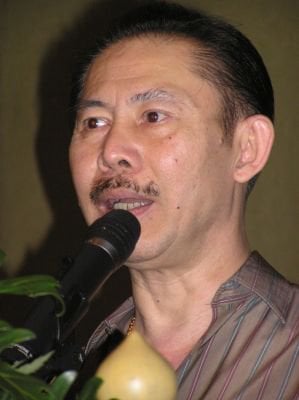 NAI YANG: Vichit Na Ranong, a former senator and current President of the Thai Hotels Association, yesterday spoke out against the oil pipeline slated to be built in Phang Nga, saying, “It will ruin all tourism here and we will never get it back.”

Speaking at the opening of the new convention facilities at his Pearl Village Hotel in Nai Yang, K. Vichit said, “We have to be careful because the pipeline will be near the Similan Islands, which has very beautiful underwater natural resources, and other places along the west coast, including Phuket.

“Phuket, Phang Nga and Krabi make about a 100 billion baht a year [from tourism], which will disappear if there is something wrong with the area. What will we get as compensation?

“We don’t care only about making money, but the 100 billion baht goes toward supporting local people. We don’t want to take the risk if there are other, better ways.”

The decision to go ahead with the oil pipeline, linking a floating hook-up pipeline off Tab Lamu with a refinery at Surat Thani, was ratified at a mobile cabinet meeting in Nakhon Sri Thammarat last month, with the project expected to be completed by 2010.

But K. Wichit said, “I have told the government that if they have to do it so that Thailand will have enough energy, then fine. But I think they have other choices [of location]. Why do we have to win in energy but lose in tourism? Why don’t we do work to have both?

“It’s like playing with fire. If we produce oil to sell to others, we risk getting burned for them. Why don’t we just play with enough fire to cook our meals? That would be safer.”

Comparing Thailand with Saudi Arabia, K. Vichit said, “Tourism is our main job. We’re different from Saudi Arabia, which mainly sells oil. Saudi Arabia would be all right even if its tourism were destroyed, but Thailand is different.”

K. Wichit also slammed suggestions that the pipeline will open a new market of tourists to the area. “It’s absurd for the government to tell us that oil traders will bring more tourists.

“We have our own markets of tourists. We don’t want only oil traders coming here, and I do not believe that’s what the government truly has in mind.

“They should consider telling the truth, not just finding some unacceptable reasons to try to convince the public that they have the right … to conduct oil industry operations in tourism places.”