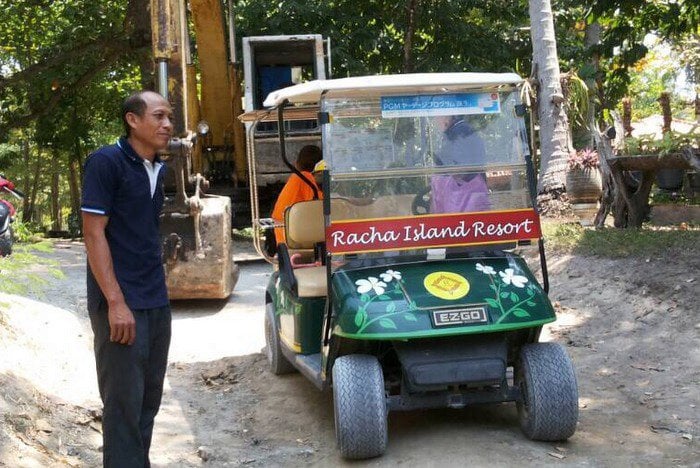 PHUKET: The completion of the Patok Canal dredging project on Koh Racha Yai has been delayed until the end of the month, after a hotel owner refilled part of the canal and attempted to prevent government workers from returning to the site.

The dredging, which began on March 7 and was expected to be completed on Tuesday, came after years of complaints from local residents about the canal’s rank, polluted water (story here).

However, officials were called to the site to investigate on Tuesday morning after the owner of the Rayaburi Resort ordered her staff to refill part of the canal near her hotel, Vice Governor Suthee Thongyam told the Phuket Gazette.

“She used a golf cart to prevent the government backhoes from entering the site to complete the dredging,” Vice Governor Suthee said. Officials withheld the name of the hotel owner.

“She claimed that our workers had destroyed trees in the area and had taken down a hotel-access bridge that was built across the canal.”

After about an hour of negotiating, the owner finally agreed to let officials continue dredging, said Vice Governor Suthee.

“The owner removed her golf cart and the backhoe she was using to fill the canal. We are now continuing with our work, but the completion date has been delayed, because we have to re-dredge that part of the canal again,” he said.

“We hope to be finished by the end of the month.”

Critical underpass intersection to remain closed until end of year