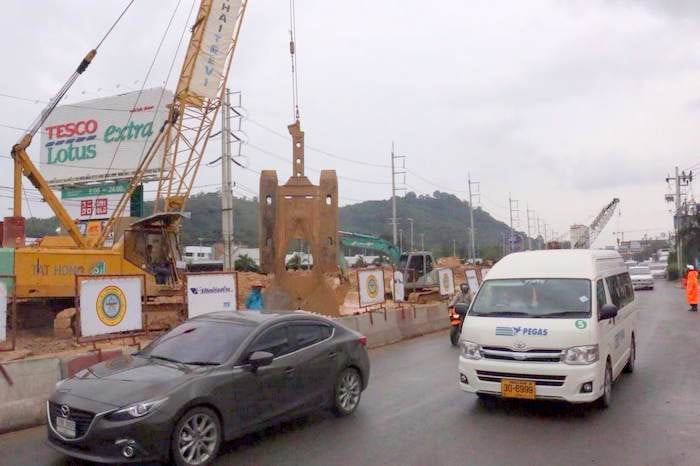 PHUKET: Traffic lanes at the Samkong Intersection, site of the Tesco Lotus underpass, between Kathu and Samkong will remain closed until the end of this year, confirmed the Phuket Highways Office director today.

The Phuket City Police announced in December that the lanes of traffic flowing between Kathu and Samkong would be closed until March 1 in order to carry out the underpass construction (story here).

However, after discussing the matter with Phuket Traffic Police and taking into consideration the smooth flow of traffic in recent months, Phuket Highways Office Director Samak Luedwonghad has confirmed that the lanes will remain closed.

“We will keep these lanes closed until the project is complete, which will be at the end of this year. The construction is on schedule; the underpass is about 50 per cent complete,” he said.

“We have found over the past few months that this setup has worked well. The traffic is flowing smoothly, which is why we have made this decision.”

Motorists driving from Samkong to Kathu must make a left-hand turn at the intersection and proceed to the u-turn in front of Phuket International Hospital, he explained.

The nearest u-turn for motorists travelling from Kathu to Samkong after making a left at the intersection is about 1.5 kilometers up the bypass road.

“This method keeps the traffic flowing; vehicles are always moving. Although the u-turns seem quite far away, the distance was calculated to optimize motorists’ safety,” said Mr Samak.