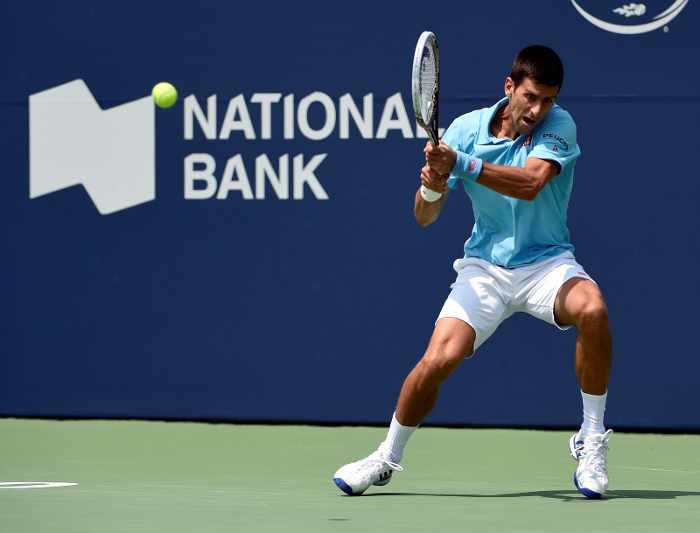 PHUKET: Gale Monfils let Novak Djokovic know his honeymoon was over and it was time to get back to work by forcing the world number one to battle for a 6-2 6-7 (4) 7-6 (2) second round win at the Rogers Cup on Wednesday.

Playing his first match as a married man, Djokovic, a three-time winner in Canada, needed two hours, 41 minutes and a third set tie-break to subdue the Frenchman and extend his perfect record over the feisty Monfils to 10-0.

“Well, it’s a first and last time I hope I’m getting married, and of course it is different circumstances that I’m in,” laughed Djokovic, who was married after claiming his seventh grand slam title at Wimbledon.

“But it’s been many years already that I have been on the professional tour and with the same team of people around me who are experts in their fields… and they are making sure I’m in the right frame of mind and in the right zone.”

Since losing in the quarter-finals of the Australian Open, Djokovic had reached at least the semi-finals in all seven tournaments since, winning at Indian Wells, Miami, Rome and on the grass at Wimbledon where he reclaimed the top ranking.

But Monfils looked determined to end that run breaking Djokovic twice in the opening set and sweeping the last four games for a 1-0 lead.

Monfils continued to press Djokovic in the second and in two consecutive service games was within two points of ending his winless drought against the Serb.

In the third, the Frenchman again went up a break but Djokovic would immediately break back forcing the set to a tie-break which he easily won.

“Gael is Gael, that’s what he does,” said Djokovic.

“He loves jumping around, sliding, he’s very unpredictable. You don’t know what his next move is, so that’s why he’s so interesting.

“I said before that he’s probably the only guy in the world, tennis player, that I would pay a ticket to watch the match.

“He’s really fun to watch but not so much fun to play against.

Briton Andy Murray, twice a winner of the Canadian crown, got his North American hard court campaign off to a much smoother start with a 6-2 6-2 win over Australian teenager Nick Kyrgios.

Seeing his first action since a quarter-final loss at Wimbledon, Murray looked confident and sharp, disposing of his 19-year-old opponent in 54 minutes on a sunny centre court under the watchful eye of new coach Amelie Mauresmo.

After lifting the title in 2009 and 2010, Murray had to be wary of Kyrgios, who caught the world’s attention when he knocked out world number one Rafa Nadal and number 14 Richard Gasquet on an unlikely march into the Wimbledon quarter-finals.

The young Australian, however, never threatened Murray and the eighth-seeded Briton was in control from the start, serving up seven aces, committing just 11 unforced errors and never facing a break point.

After a difficult 12 months during which he underwent back surgery and a coaching change, Murray’s performance provided a small boost heading towards the U.S. Open and the year’s final grand slam which begins on Aug. 25 at Flushing Meadows.

“I thought I did most things like pretty solid,” Murray told reporters. “I didn’t make too many errors. I moved well. High first-serve percentage.

“It was a solid match for a first match back after sort of four and a half, five weeks.”

Fifth seeded Spaniard David Ferrer was made to fight for his place in the third round battling to a 6-4 2-6 6-1 win over American qualifier Michael Russell while 12th seed Gasquet rallied past Croatia’s Ivo Karlovic 5-7 7-6 (5) 6-3.

Thirteenth seed Jo-Wilfried Tsonga came out on top in an all-French battle beating Jeremy Chardy to reach the third round where he was joined by compatriot Julien Benneteau, who advanced with a 7-6 (4) 6-3 upset of 11th seeded Latvian Ernests Gulbis.