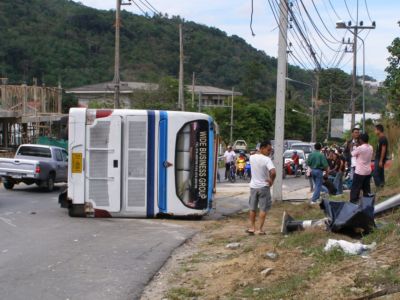 Lt Rattaket Manmuang of Karon Police Station said, “The bus driver, 34-year-old Paitoon Panbuddee, said that he lost control of the bus after the brakes failed as he was driving down the hill.”

The accident happened about 7:40 am, he said.

“The bus side-swiped two oncoming vehicles – a pickup and a van. A motorcyclist then collided with the van,” Lt Rattaket said.

No one was killed in the accident.

“There were about 32 workers on the bus. Most of them are fine, but one man is now in intensive care,” said Lt Rattaket.

“We have charged the bus driver with negligent driving causing injury,” he added.

The bus belongs to Wide Business Group, which is contracted to transfer Hilton staff to and from work.