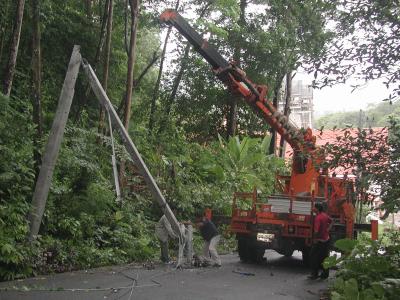 PHUKET: Blustery winds and torrential rain led to blackouts in parts of Phuket yesterday when landslides and trees felled by strong gusts brought down power lines. TV and radio stations on Rang Hill in Phuket City were off the air for around 12 hours when two power poles came down. Engineers from the Phuket Provincial Electricity Authority (PPEA) restored power there at 1 am today. A landslide early yesterday evening near Surin Beach brought down six power poles and blocked the road to Kamala. Wikrom Maipanich, Deputy Chief of the PPEA’s Operation Section, told the Gazette that he expects repairs to be completed today. K. Wikrom said “One of the major problems is trees (on private land) being too close to power poles. The trees are blown about or blown over and bring down the power lines. “It happens every time we have a storm. We will ask the Governor to consider how to deal with this problem.” K. Wikrom said that another problem is landslides, which he blamed on deforestation. “Trees are felled for the many hillside construction projects and landslides are then more likely in heavy rain,” he explained He said that consumers could contact the PPEA on Tel: 076-210379 anytime to report supply problems. Metha Mekarat, Chief of the Phuket Office of Disaster Prevention and Mitigation, said that one tree fell across a road near Layan Beach and another came down on a house in Anuphas Manorom Village. “Damage to the house was minimal and no one was hurt in either incident,” he said. No estimate of the cost of the emergency work carried out has yet been made. The silver lining to the current meteorological cloud came from Sayan Wareearoonroj, Manager of Phuket Provincial Water Supply. “The rain is adding significantly to the two million cubic meters of water recorded in Bang Wad reservoir last week,” he said. “To ensure adequate supplies until the end of the year we need enough rain in the next three months to add another six million cu m to the reservoir.” Vichit Phuangsombat, Director of the Southern Meteorological Center (West Coast) told the Gazette that the strong winds are quite typical during this part of the wet season. He added that the wind and rain will continue to come in waves lasting a few days, alternating with periods of calmer weather. “Please monitor the weather situation by the Internet or radio, especially if you intend to go out to sea,” he advised.

Beauties in the beastly weather