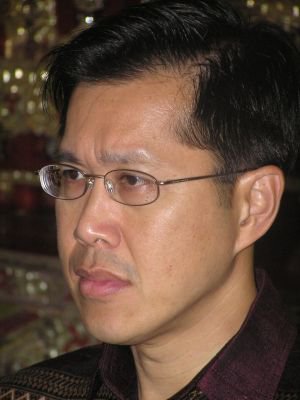 PHUKET CITY: Six plots of land in Muang District “belonging” to two people were seized today in a massive operation led by the Minister of Justice, Pongthep Thepkanjana. K. Pongthep was accompanied by the Secretary of the Anti-Money Laundering Office, Pol Maj Gen Pirapan Premputi; the Chief of the Crime Suppression Police, Pol Maj Gen Kosin Sintao; and even the Chief of the country’s Tourist Police, along with dozens more police officers. It is alleged that the six parcels of land, totaling 104 rai and estimated to be worth 26 million baht, are actually Forestry Department and SorPorKor land. One of the owners was named as Boonkeng Srisansuchart, 54, developer of the Srisuchart Grandview and Srisuchart Grandview 2 housing developments and owner of a trucking company. Officials declined to name the other owner. A police officer explained to K. Pongthep that K. Boonkeng had leased 76 rai of Forestry and SorPorKor land in the Panturat Hills next to the bypass road since 1983, on a 30-year lease granted to him by a provincial vice-governor of that time. He had used the land to collect water to supply other land he owned downhill. It is alleged that he had since obtained Chanote or NorSor 3 Gor titles to the land, in collusion with corrupt Land Office officials. The case has been sent to the Public Prosecutor, the officer told K. Pongthep, adding that, of a total 884 rai of SorPorKor land in Phuket, 706 appeared subsequently to have been issued with more valuable, but spurious, titles. Investigators were now checking all these titles, he said. K. Pongthep said that the two cases tackled today were regarded as coming under the umbrella of the War on Dark Influences, since the involved large-scale encroachment onto government land. He noted that the standard ploy of such people was to obtain land titles illegally, and then to borrow against those titles in order to invest in other projects. Maj Gen Pirapan said, “Today’s cases will be referred to the Civil Court, which will decide whether the land should be returned to the relevant government departments, along with any structures on the land.” This is not the first time that K. Boonkeng has had difficulties over land. In July last year he was arrested on land-grab charges and is currently on bail of 2 million baht awaiting trial in connection with those charges. Maj Gen Kosin said that investigators had been told by former land officials that they had received bribes of as much as a million baht per title for issuing false titles. What happens to these officials will depend on the National Counter-Corruption Commission and the Crime Suppression Division, he added.

World tournament will be a great success – Fifa