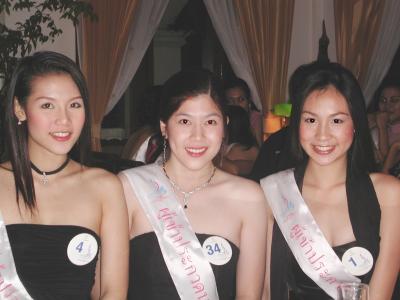 PHUKET: The 40 contestants in the Miss Siam 2004 competition are in Phuket as part of their preparation for the contest, which takes place on June 12 in Bangkok, with prizes worth more than 3 million baht for the winner, plus a place in the Miss Tourism International competition. Apart from posing for the usual plethora of photos in various outfits, the 40 girls yesterday brightened Governor Udomsdak Usawarangkura’s day by descending on his office en masse. During their stay they have also visited Phuket FantaSea, Laem Phromthep and the Heroines’ Monument and starred in a video promoting tourism. Last night they were treated to dinner at the recently opened Baan Klung Jinda restaurant. They are due to fly out to Bangkok today. The rules of the contest, organized by AD Media Co and U-Srim Products, require that all contestants be aged between 18 and 25, around 1.65-meters tall and possess a degree or be studying for one. While in Phuket, the contestants stayed at the Dusit Laguna Resort Hotel.