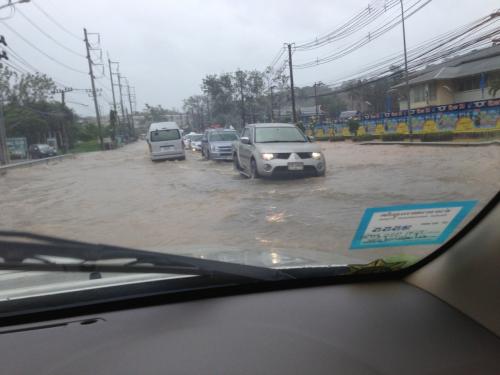 PHUKET: Heavy rain in Phuket this morning caused minor flooding across the island, including in Patong on the west coast, in Chalong in the south and in Srisoonthorn in Thalang.

Roads cut off by flash-flood runoff forced traffic to a standstill as small vehicles could not get through.

Traffic was backed up in front of the TOT office on Chao Fa West Road in Chalong, a regular site for minor flooding after heavy rain, where floodwater reached up to 50 centimeters high.

Many motorists hoping to avoid the traffic snarls on Chao Fa West Road were caught up in huge tailbacks on Chao Fa East Road, with one motorist reporting to the Phuket Gazette that it took him two hours to make it across town.

Patong also suffered minor flooding, with reports of floodwater inundating the road in front of Patong Hospital on Phang Muang Sai Kor Road. Flooding was also reported at the Sainamyen Intersection and at the intersection at the base of Patong Hill.

Although floodwater in Phuket’s premier tourism town reached up to 50cm deep, staff at Patong Hospital confirmed that the facility remained unaffected.

“Flooding in Patong is an ongoing problem. It is because of issues with the drains, especially along Phang Muang Sai Kor Road,” he told the Phuket Gazette today.

“However, we have been working on installing larger drains. We are also working on improving the road surface so that floodwater runs off, leaving the road clear for traffic to continue. The whole project will be completed by the beginning of next year,” he explained.

“Flooding will no longer be a problem when it is done,” Mr Chairat assured.