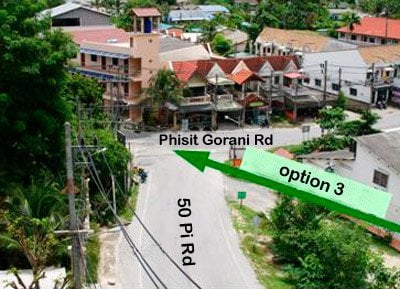 PHUKET CITY: If Friday’s public hearing is any indication, there appears to be little grassroots opposition to two major road projects being considered for Phuket.

The event at Royal Phuket City Hotel combined two public hearings into one.

By coincidence, the two hearings were scheduled to take place at the same time in the same hotel, causing a great deal of confusion among attendees.

The first was for the Patong Tunnel project, an idea championed by Patong Mayor Pian Keesin and now the subject of a 15-month, 40-million-baht study by a team of Bangkok-based engineers.

The second was for Phuket Governor Wichai Phraisa-ngop’s idea to build a second north-south artery parallel to Thepkrasattri Road, mostly using state land under the control of the Electricity Generation Organization of Thailand, or Egat.

The proposed road would follow the route of Egat high-tension power lines and the pylons that support them.

After short introductions outlining both projects, the public was given a chance to ask questions and voice concerns.

Gov Wichai, who sees improving the island’s road infrastructure as a top priority, said, “I agree with both projects because they will benefit Phuket, but we need to think about all aspects and be very careful when conducting the feasibility studies,” he said.

“Most important of all, the people of Phuket must express their views. Tourists and people like myself are only here for a while. We come and go, but you live here,” he said.

Mayor Pian said the Patong Tunnel project would benefit not just Patong, but the entire island and Thai tourism industry.

The public should not think that the 40-million-baht price tag for the project study that got underway in July is exorbitant, he said.

He justified the amount by saying it involved a large number of professional consultants working over a long period of time.

“Fifteen months from now we will have all the answers,” he said.

“Phuket is a place to make money, and we all work all day and all night to promote tourism. Even if this project has a high initial cost, we will still be able to get back our investment within six or seven years,” he said.

Few in the crowd seemed worried about possible negative impacts of the project on the environment.

When she asked what would happen to the old road if the tunnel was completed, she was told it would remain open to traffic.

Another resident, Junthanaporn Petchjamnong, asked the panel if people would have to pay a toll to use the new tunnel route, but there was no answer to her query.

Sources familiar with the study have told the Gazette that funding the project by allowing a construction firm to build it under a ‘build-operate-transport’ agreement was one option being studied.

As for the proposed second road to the airport, attendee Tippamas Uphutnoi told the hearing she was concerned that building it along power lines could result in dangerous accidents that could trigger island-wide blackouts.

“How long will it take to make repairs if someone crashes into a pylon?” she asked.

Peerapong Phonpramul, a local reporter, said that for both projects it was important to listen to the wants and needs of local residents.

It was important to ensure that they, and not just the tourism industry, benefit from any construction, he said.

Mayor Pian also expressed some concerns about safety and convenience when using a road built along power lines.

“What will happen when we try to use our cell phones there?” he asked.

Two more public hearings are due to take place as part of the Patong Tunnel project study.

One is expected to take place ‘soon’, although the exact date has yet to be announced.

Why did Phuket police officers cross the road?