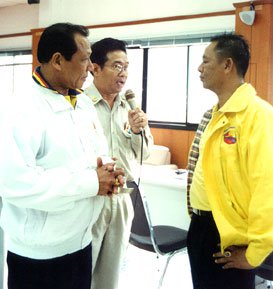 PATONG: Patong’s dramatic municipal election developed a fresh twist today when the brother of accused Mayor Surasak Maneesri was nominated for the leading role in his place. But K. Surasak stressed his desire to prove his innocence of allegations of disreputable behavior and replace his brother, Chalermsak, as candidate for mayor before the polls on November 16 and 17. While 300 people outside the Patong Municipal Office today cheered on both parties contesting the polls, the 38 election candidates were inside, having their ballot numbers drawn. In anticipation of Patong being declared a Tessabaan Muang (town) there will be two elections: one for the position of mayor and the other for members of the municipal council. Coming out with the advantage on the ballot paper was K. Surasak’s rival, former mayor Pian Keesin. He drew No 1, leaving K. Chalermsak with No 2 on the mayoral ballot papers. This means that, on the ballot papers for the councilors, K. Pian’s Palang Patong party will have numbers 1 to 18 while the candidates from the brothers Maneesri’s Patong Gao-na will be numbered 19 to 36. Candidates have until October 15 to register for the elections. But because only two groups have declared their readiness to run, Somkiet Kwansuwan, Palad of Patong, and the Election Commission agreed that the numbers should be drawn today. Mayor Surasak was accused of disreputable behavior and was last week ordered by the then-Interior Minister, Purachai Piemsomboon, to step down from his position – just a day before his role as mayor expired. Onlookers listened with fascination today as the key role-players reviewed the state of play. K. Pian said with a smile, “My team and I are ready for this election and ready to develop Patong. I think what happened to K. Surasak does not give us any advantage because our group already has the support of the people of Patong. “They’ve seen what we’ve done in the past. We also screened everyone in our team to make sure that there won’t be any candidates who will use their membership of the council for personal benefit.” Later K. Chalermsak said, “To be a candidate in place of my brother is not something that we [Patong Gao-na] just decided. I had been prepared because we knew that someone had it in for my brother. “There isn’t another good politician like him. I believe that we are still ready to work for Patong and I myself have a good reputation, having been involved in local politics for years.” Ex-mayor Surasak said of his appeal to the Administrative Court in Bangkok, “I will win the case for sure. I am keen to have an answer from the court because I want to be a candidate. I will be back for the election. However, if the case is not finished in time, I can still can be adviser to my brother. “It’s interesting that the order came just one day before my position expired.” In a message apparently directed at K. Pian, he said, “To anyone who thinks he already has it sweet, please don’t be careless.” K. Somkiet said he expected a 60% turnout for the vote and hoped the new two-part system would be understood. “Up until October 15 we will be checking all the documents submitted by the candidates,” he said. “And after that we will check their qualifications again.”