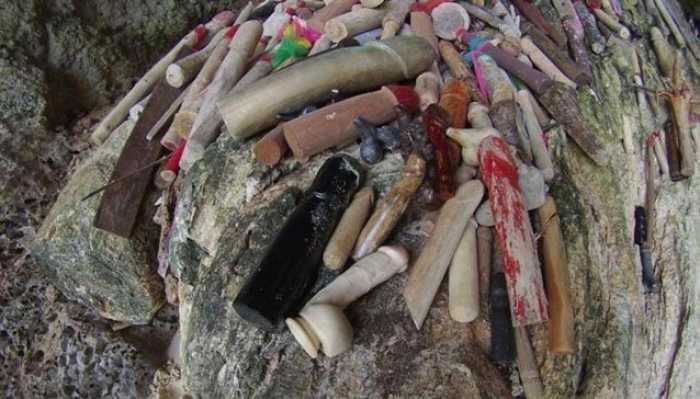 PHUKET: Krabi officials removed a large, pink faded sex toy from a sacred cave this morning, after it was found mixed with traditional carved wooden phalluses.

The offending item, discovered in Phra Nang Cave, started local tongues wagging when a photo of it residing in the cave appeared on a foreign website.

“We believe it was left there by a tourist who doesn’t really understand local beliefs,” Komart Paenkerd of the Krabi Provincial Cultural Office told the Phuket Gazette.

“Since antiquity, it is believed by locals that putting wooden Palad khik penis carvings in the cave will evoke the spirit of ‘Phra Nang’ and ensure that you find true love.

“I would like to inform tourists that sex toys are inappropriate as an offering. Locals worship the spirit of Phra Nang with hardwood only.”

So far, only one unacceptable penis has been exposed.

“We have checked the cave and found only one offensive item. This penis was made of silicon,” a Railay Beach guard informed the Gazette.

However, Krabi officials remain convinced the appearance of the silicon soother was an innocent mistake.

“Some locals feel upset by this, but we believe it was a misunderstanding on the part of the person who left it there,” Tourism Authority of Thailand Krabi Director Wiyada Srirangkul told the Gazette.

“Krabi tourism, though, is doing fine. We do not expect any serious repercussions from this incident.”

Ms Wiyada asked tourists to help keep a look out for those who might stick inappropriate phalluses in the wrong places.

“Please let our officers know if you see something strange. We have also informed our local officers and locals to be vigilant – we don’t want this kind of misunderstanding to happen in the future,” she explained.