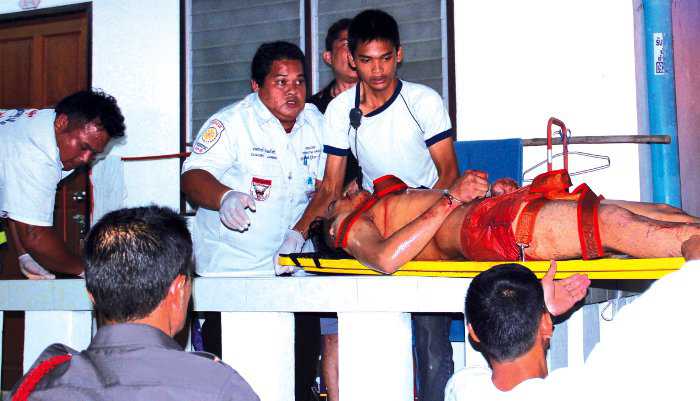 PHUKET: There’s been a lot of death in Phuket lately. It seems that stories about death and violence have been pouring in on a regular basis over the past several weeks.

There was the drug-crazed maniac who chopped up his friend with a meat cleaver and tried to do the same to his girlfriend, and himself. Then, there was the murder victim who had presumably been strangled and bashed in the head that my friend and I found and dragged to shore while surfing in Nai Harn.

After that, there was the man with wrists and ankles bound whose body washed up near the Sarasin Bridge; the brutal murder of the two young British travellers; and now another corpse – this time a female – with wrists tied discovered on Surin Beach.

I’ve yet to mention the list of violent attacks that did not result in death, as well as the high number of traffic injuries and fatalities.

Often, I am surprised when police are able to track down the perpetrators considering their lack of resources, alleged corruption and the ease with which criminals to seem to disappear into the jungle.

Catching criminals is one thing, but preventing crimes is a different issue altogether. The retroactive approach is likely to have a miniscule impact on dissuading people from committing crimes, especially with a justice system that shows an excess of compassion to those who seem to be “remorseful” of their crimes.

I am not Thai and realize it is not my place to criticize the legal system here or pretend to advise on how to prevent crime.

But in some ways, this is a trying time for the Kingdom, especially regarding its reputation around the world. The spotlight was already pointed in this direction following the political dramas which unfolded in May, and the international media was dredging up the human trafficking issue, with the US threatening sanctions.

The last thing Thailand needs is innocent backpackers being raped and slain, closely followed by what many consider inappropriate and insensitive comments by the new premier.

The point is, reputation counts for something, and is even more important when four per cent of your gross domestic product is derived from tourism.

If word gets out that hotspots like Phuket and Koh Tao are becoming dangerous and anything less than carefree getaways, there may be trouble in paradise.

Bag it up, Phuket