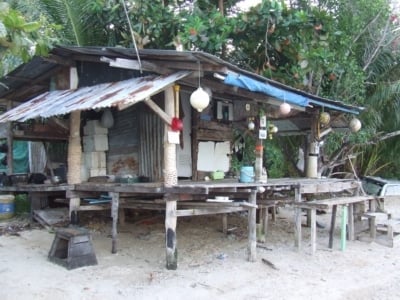 PHUKET: The body of a man found hanged in a wooded area of Rawai last Wednesday has been identified as a native of Hamburg, Germany.

Police have so far been unable to confirm the exact spelling of his name or his age, as no documents identifying the deceased were found.

Officials at the German Embassy told the Gazette today they have yet to be notified by police and were previously unaware of the case.

Friends of the deceased who spoke to the Gazette said he was once a wealthy expat who had lived in Phuket for several years and once owned a yacht.

However, for several months before he died, the man had been penniless and homeless, sometimes staying in a driftwood and corrugated-tin shack with a local Thai man in a secluded spot near Laem Ganoi Beach in Rawai.

According to one of the man’s friends, fifty-year-old local fisherman Richard Kongmuang, the deceased was seen walking along the beach the morning of the day his body was found.

Prior to that he hadn’t seen the man for about three months, he said.

The deceased was discovered hanged from the neck by a long, blue nylon packing cord tied to a low branch.

Mr Richard said the man had been troubled for quite some time. “He used to have a Thai girlfriend and he lived near Chalong Circle,” he said.

He was a heavy smoker who could smoke close to a pack an hour, said Mr Richard.

“I think he had been tricked out of all his money,” said Mr Richard without giving details.

The body of the deceased was taken to Vachira Phuket Hospital. A medical examination confirmed the cause of death as asphyxiation.