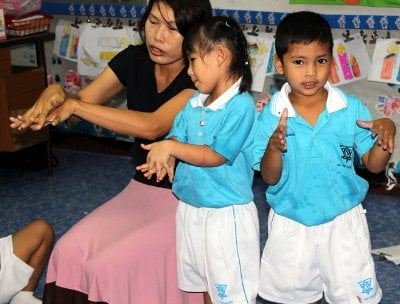 PHUKET: Following the outbreak of Hand, Foot and Mouth Disease (HFMD) in Thailand which caused the death of a 2-year-old toddler in Bangkok last week, the situation in Phuket is largely under control, health officials say.

Phuket Public Health Office (PPHO) Chief Dr Sak Tanchaikul told the Phuket Gazette that more than 10,000 cases of the viral disease have been reported in Thailand from January 1 to July 22 this year.

PPHO statistics for the same period revealed 246 reported cases in the province, with most patients under 15 years of age and clustered in the Cherng Talay area, he said.

“The PPHO is focusing its efforts on preventative measures. We meet with representatives of kindergarten and primary schools and instruct them to conduct weekly or twice-weekly cleaning of classrooms and equipment, and instruct teachers to closely monitor any students who may be showing symptoms [of the disease],” he said.

Symptoms may include fever, headache, vomiting and fatigue as well as a rash that develops on the body parts that the condition is named for.

To be on the safe side, the PPHO is urging educators to call the parents of children who have even slight fever symptoms. Such students should be cared for at home and not returned to school until they are feeling well, he said.

Patient figures in Thailand are relatively small compared with Singapore and Vietnam, he added.

Apichai Mohamad, chief of the Thalang Public Health Office, said a meeting was held on June 20 to deal with the outbreak in that district.

“We invited all kindergarten and primary school directors to inform them about the disease and the specific measures needed to prevent its spread. We asked for their cooperation in monitor their students very carefully, making daily health checks and report to us as quickly as possible information of any students who display symptoms. Also, open areas, teaching equipment, tables, chairs and toys all need to be cleaned at least once a week.

“Thus far I am happy with the cooperation they have shown,” he said.

Mr Apichai explained that officers at the local public health clinic in Thalang had been assigned to visit kindergarten and primary schools in their areas of responsibility to educate the teachers and parents, advising them that there is no need to worry because the spread of the disease can be prevented through proper hygiene.

“We advise them to carefully monitor their children’s hygiene,” he said.

“Symptoms include fever, illness, a sore mouth and development of a rash on the palms, fingers and soles of the feet. Any parents who suspect that their child has hand, foot and mouth disease, or who aren’t certain about the cause of any fever or rash, should take them to see a doctor instead of school,” Mr Apichai said.