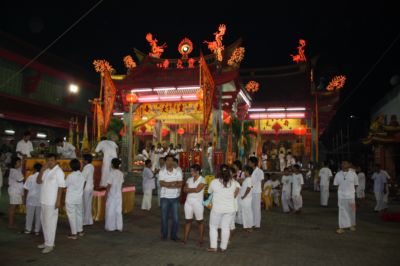 PHUKET CITY: Half a million people are expected to attend this year’s Phuket Vegetarian Festival, bringing in around 33 million baht, a senior tourism official said.

Wanaphapar Suksombul, Assistant Director of the Tourism Authority of Thailand’s Phuket Office, said 80 percent of Phuket City’s hotel rooms have been booked up during the event, which officially started at midnight on Saturday.

Ms Wanaphapar said a large number of Chinese tourists were expected to attend.

Two charter flights carrying 500 tourists from China had already arrived on the island, and 10 more flights from Beijing, Kunming and Shanghai were expected to land in the next few days, she said.

Dr Wiwat said any mah song intending to pierce his face with sharp objects should first clean the area thoroughly with alcohol. The mah song, are the ‘mediums’ the gods enter during the festival.

The maa song manifest supernatural powers and perform self-mutilation so they can absorb evil from other individuals and ensure good luck for the entire community.

Dr Wiwat urged the mah song not to share any items they pierce themselves with, just as they would not share dirty needles.

He also warned against using objects that were too big or that had rough surfaces, and asked anyone helping mah song with their piercings to wear gloves.

The piercings on parade at the festival are made through the mah songs‘ tongues, cheeks, nipples and other parts of the body, using spears, daggers, sharpened branches, bicycle chains and just about anything else that can pushed or pulled through one’s anatomy.

The PPHO was providing medical teams to follow some of the parades, “but only for shrines that ask for them, as we don’t have enough staff to follow all the marchers,” he said.

Jui Tui, Kathu and Bang Neow shrines were among those that would be supplied with medical teams, he said.

“A lot of food will be prepared for all the vegetarian adherents, so vendors must make sure their food is clean and always keep it warm,” he said.