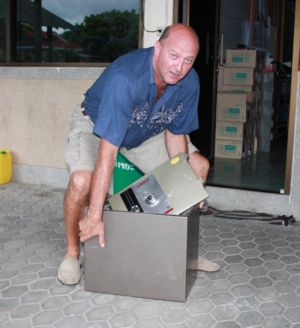 KATHU, PHUKET: Two bungling robbers broke their legs in a motorcycle crash while trying to drive home with a 25-kilogram safe they stole from a British expat’s house, police said.

But Inspector Kittipong Kaikaew of Tung Tong Police said the two men sneaked into the house through a window and stole the safe while the Kelleway family were asleep in the early morning.

Lt Col Kittipong said the pair drove about 500 meters east along Wichit Songkram Road on a Honda Wave motorbike – all the while holding their burdensome booty – and smashed into the back of a taxi.

Police found the two suspects sprawled on the road in front of the Krua Tung Tong restaurant in Kathu village at about 1:30am. Next to them was the overturned bike – and Mr Kelleway’s safe.

They claimed the safe was “nothing to do with them”, Lt Col Kittipong said.

The police broke open the safe and found 176,000 baht in cash, six passports and some housing documents, which helped them find Mr Kelleway.

Lt Col Kittipong turned up at the house on Saturday morning to tell the Brit, who hadn’t even realized he’d been burgled, what had happened.

“I feel very lucky,” Mr Kelleway said. “It would probably have taken me two days to notice the safe was even gone.”

Mr Kelleway, a 45-year-old retired property developer, said nothing else was missing.

“They headed straight for the safe. They probably knew it was there somehow,” he said.

Still, that didn’t stop them using a 100cc motorbike as their getaway vehicle.

“When I found out they’d crashed, I thought ‘serves you right’,” Mr Kelleway said.

Lt Col Kittipong returned the money and console to the Kelleway family at Tung Tong Police Station on Tuesday.

“It’s not often you see your stuff again after a robbery,” said a grateful Mr Kelleway.

“I suppose the safe did its job in a way – although the police got into it pretty easily,” he added.

The two suspects, who were last week being treated in Vachira Phuket Hospital for broken legs, face up to seven years in jail.

“From now on, I’ll keep my money in a bank,” said Mr Kelleway.

Half a million expected for Phuket veg fest