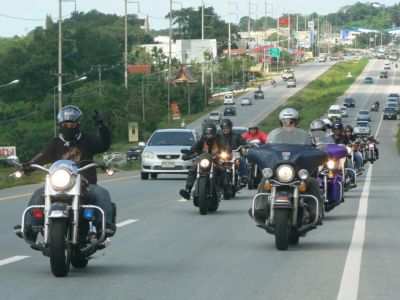 PHUKET: It’s official: the 52 Harley-Davidsons and their 74 riders that collectively notched up 21,000 kilometers by riding from Phuket to Krabi and back on Monday have been added to the global tally to set a record for the most miles on that one day by ‘hog’ riders.

Bikers from Phuket, Haad Yai, Krabi, Trang and Pattalung set off from the West Coast Ride Thailand big bike shop on the bypass road at 9 am and returned late afternoon as part of “Million Mile Monday”, organized by HOG, the international club of Harley-Davidson owners.

The worldwide target of one million miles ridden on Harley-Davidson motorcycles on the same day was hailed a huge success, with the virtual odometer going way past the million-mile mark to clock 3,000,960 miles in total – equivalent to120 trips around the equator, said the organizers.