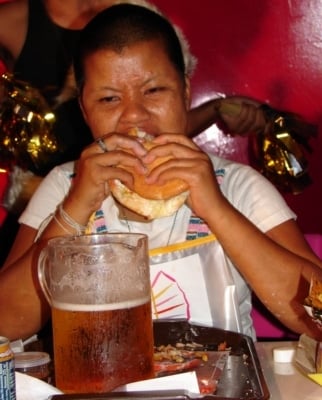 PATONG: The champion of Jungceylon’s first Charity Eat-A-Thon, held from March 9 to 11, is Brazilian Moises Huerta. He downed two large hamburgers, a personal-size pizza, three donuts, a pitcher of beer and a bottle of water. The massive meal earned him 10,000 baht in winnings.

The Eat-A-Thon raised about 20,000 baht in donations to help buy lunches for poor children at Baan Sai Nam Yen School.

“It was a lot of fun. I was not expecting or preparing to win the competition,” Mr Huerta told the Gazette. “While I was eating I looked at the other competitors who were eating so quickly but I wanted to eat to slowly. The important thing was that I ate tom yum kung and fried rice two hours before to this game,” he added.

The final round had seven competitors, including only one woman – Saowakhon Saetia. She did well but failed to keep her meal down.

Phuket local Jirawat Musikkarat was the first to finish, but he was disqualified after being sick on stage, making room for Mr Huerta to win by finishing next – and keeping the meal down.