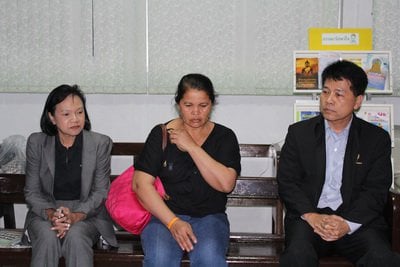 PHUKET: The mother of Phuket Games athlete Sutthipong Laphutama, 18, who died in a motorcycle accident in Rawai yesterday, arrived in Phuket to collect her son’s body this morning.

Mr Sutthipong died after the motorbike he was operating crashed into a brick wall.

Also on the bike was 13-year-old Attapong Noikhamsingha, who is still recovering in hospital.

“I can’t believe it happened. I never thought he would leave me at such a young age,” said Sutthipong’s mother, Ms Atittaya Sopakul.

“Before he left, he told me he would be my good boy,” she mournfully added.

Ms Atittaya said that she had not talked to her son since he left for the games. “I did not call him because I was afraid it would disturb him and he would not have the time [to talk] during the games,” she said.

Ms Atittaya returned to Bangkok with her son’s body on board a Thai Airways flight this morning.

NOTE: The initial report by the Gazette named 13-year-old Atthapong Noikhamsin as the person who was operating the vehicle at the time of the accident. That report was based on comments from an eyewitness and police officers at the scene. Subsequent updates from the police identified 18-year-old Sutthipong Laphutama as the driver.