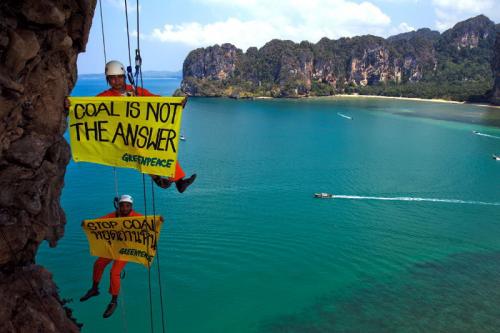 PHUKET: Hanging from the cliffs of Railay Bay in Krabi (view here), east of Phuket, Greenpeace activists staged a dramatic protest against the Thai government’s plan to build coal power plants across Thailand, including an 800 Megawatt plant in Krabi.

The protest, held last Thursday, follows that of 500 Krabi villagers on February 11 (story here) who claimed that a coal-fired plant in their area from 1964 to 1995 had left many of them with respiratory problems and cancer.

Holding signs that said “Stop Coal” and “Coal is not the answer”, Greenpeace was sending a message to the public and the government to exchange coal-powered plants for clean energy, said Jariya Senpong, an energy and climate change campaigner with Greenpeace Southeast Asia.

“Coal is not the answer for critical energy problems today,” Ms Jariya said.

“They should think about supporting clean energy which will be a sustainable solution,” she added.

“Local people and Greenpeace are standing up against the project because we believe the plant will create pollution that could affect not only the villagers’ way of life, but also tourism in Krabi.

“It may also harm the seagrass in the area, which is the habitat for endangered dugongs,” she said.

Ms Jariya also called for a government crackdown on corruption and conflict of interest of dirty energy industries that help politicians.

“Villagers will be the ones who suffer,” she said.

A meeting is planned for Wednesday, from midday to 6:30pm for villagers, Greenpeace Southeast Asia and other supporters to discuss Thailand’s energy crisis and the Krabi coal power plant, she said.