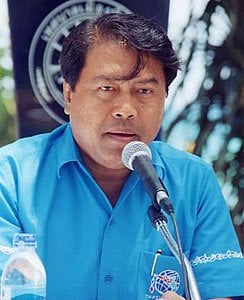 PHUKET TOWN: Phuket Governor CEO Pongpayome Vasaputi is being promoted to the important post of Director-General of the Department of Local Administration (DOLA) after two years running the province, a vice-governor has confirmed. After Gov Pongpayome came to Phuket in October 2000, he became one of five pioneer Governor CEOs in an experiment initiated by Prime Minister Thaksin Shinawatra. In his new role, the island’s departing 55-year-old leader will oversee the introduction of governor-chief executive officers in the other 70 provinces. His replacement as Governor CEO in Phuket is Udomsak Usawarangkura, 58, the present Deputy Director-General for General Affairs at DOLA and a former Governor of Pattani. During Gov Pongpayome’s time in Phuket, he led campaigns in the war on drugs and corruption among “influential people” and was quick to realize that the execution-style murder of land official Pongtorn Hiranyaburana in April was a direct blow at the heart of good government. Soon after the killing, PM Thaksin announced an inquiry that quickly grew into today’s widespread investigation of illegal land titles. The announcement of Gov Pongpayome’s departure was typically low-key and made by one of his deputies. At about 1:30 this afternoon, Gov Pongpayome spoke at a meeting of policemen from the island’s eight police stations at The Merlin hotel in Phuket Town. With the Commander of Phuket Provincial Police, Pol Maj Gen Kongpol Suwannaraks, among the listeners, Gov Pongpayome told his audience that Phuket was rated by some national administrators as the best place to live and among the top three in Thailand for high incomes. His advice was that “everyone has to help each other, be they officers or local residents. Phuket is just like our house, we need you all to clean it, to be tidy.” Gov Pongpayome said that the official campaigns over drugs and “influential people” would continue, with more information needed from locals who knew the identities of the villians. It was left to Vice-Governor Niran Kalayanamit to tell the meeting about Gov Pongpayome’s new appointment. An official announcement will probably follow. Gov Pongpayome is expected to quickly become immersed in special training, beginning later this month, aimed at developing the economic and managerial skills required among the new governor CEOs. Governors are non-elected career bureaucrats appointed by the Ministry of Interior. The Cabinet was to meet today to name CEO governors for 30 provinces, who will take office on October 1.

Official’s land holdings worth B100 million