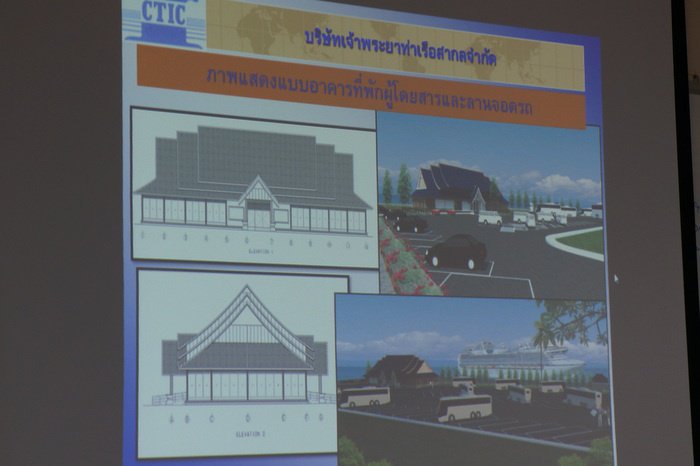 PHUKET: Governor Nisit Jansomwong has vowed to make Phuket a world-class hub for yachts and cruise boats in Southeast Asia by putting his weight behind a multi-million-baht harbor expansion project at the island’s Deep Sea Port.

The governor’s resolve follows a meeting on Tuesday headed by Minister of Transport Air Chief Marshall Prajin Janthong, who announced plans to make Phuket the main port of call between Singapore and Myanmar for cruise ships and yachts.

“When Prime Minister Gen Prayuth Chan-o-cha was informed about the project, he insisted that I work together with the Minstry of Sports and Tourism, Finance and Interior to expedite the project. He sees it as a great opportunity to bolster the tourism industry and image of Thailand,” said the Air Chief.

With the strong support of the central government, Governor Nisit says he’s sure the project could succeed.

“I believe we have the potential [to take on this project], as we already have four private marinas and one deep sea port,” wrote Governor Nisit on his Facebook page.

“I think Phuket has more yachts registered than anywhere else in Thailand. In 2013, we welcomed 1,349 international yachts and in 2014, that number increased to 1,451 yachts.”

Gov Nisit added that for the last 12 years the island has played host to a boat show and noted the advantage of having a leading yacht maintenance center at the Phuket Boat Lagoon.

Despite standing firm in his belief that Phuket could successfully carry out the port expansion project, Gov Nisit explained that there would be bumps in the road.

“We could face some issues with launching this project, such as the environmental concerns associated with it,” he explained.

Since 2011, Phuket officials have been trying to get the required Environmental Impact Assessment (EIA) passed so that the project could officially begin (stories here and here).

Gov Nisit also explained that Chaophaya Terminal International Co Ltd, which has the government concession to operate Songkhla and Phuket ports, has already laid out the expansion plans for the port.

“Chao Phraya Construction has put the project on hold for now, as the Treasury Office regulations now allow only one-year concessions for use of marinas. The company does not want to go ahead with the project if they only have one year to complete it,” Governor Nisit confirmed to the Phuket Gazette today.

Government concessions have been a problem since 2011, when Wathanachai Raunglertpanyakul, then director of Chaophaya Terminal International Co Ltd, told the Gazette that even a five-year concession was too short.

“We have had the contract to run the port from the Treasury Department since 1988. The first concession was for 10 years, but since then each concession contract has been for only five years, which does not leave us enough time to invest in big projects,” Mr Wathanachai said.