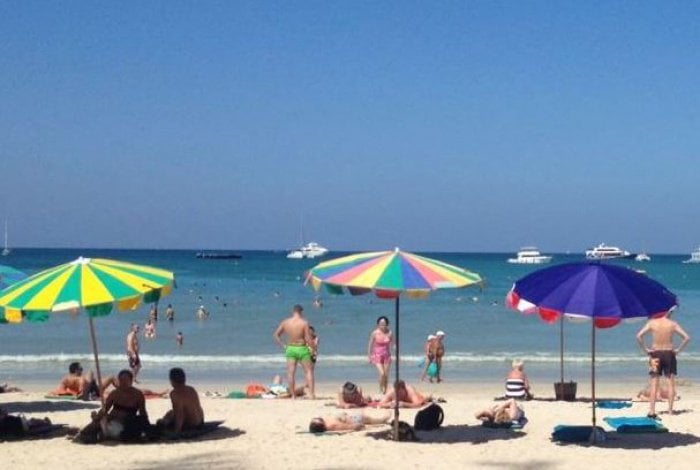 PHUKET: A three-month trial of a scheme to get beach vendors back to work in special zones along Patong Beach was launched on January 3, but the zones do not encompass enough space to cater to the volume of daily visitors, says the local mayor.

The zones are roughly 100m-wide swaths of beach that extend down to about the waterline, composing 10 per cent of the beach’s 3.5km length. The three areas are in front of Ocean Plaza, Starbucks and Phuket Graceland Resort & Spa.

Large white tents have been set up in the zones to house beach vendor equipment, provide space for masseuses to work and to provide space where people can sell food and drinks, while the sands within the area will also be available for tourists to rent umbrellas and beach mats, Governor Nisit Jansomwong told the Phuket Gazette yesterday.

“I told Governor Nisit that I was worried that only 10 per cent of Patong Beach was not enough, as we have more than 7,000 beachgoers daily,” Patong Mayor Chalermluck Kebsup told the Gazette, following the governor’s inspection of the beach this week. “In this space, there is room for only about 300 umbrellas, which is not enough. It will force tourists to bring their own umbrellas.”

During his visit to Patong Beach, Gov Nisit explained that there is no issue with tourists bringing their own umbrellas and beach mats, and setting them up wherever they want – inside or outside of the vendor zones – as long as they are not in the Water Sport Activity areas.

However, beachgoers renting umbrellas and mats are not to take them outside of the vendor zone, Ms Chalermluck said.

“The governor made it very clear that in order for this to be approved as a long-term solution, we must strictly enforce the rules,” Ms Chalermluck said.

“Tourists bringing their own umbrellas need to make sure they aren’t accidentally setting them up in the Water Sport Activity areas (story here). We are hurrying to install more signs to warn tourists not to sit or swim in those areas.

“Tourists can swim safely inside the marked swimming areas.”

Gov Nisit will review the system currently in place after three months to decide whether or not it will be permanently implemented, confirmed Ms Chalermluck.