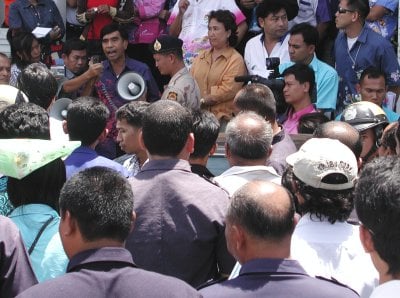 The drivers arrived at Provincial Hall at 7:30 this morning, angered by a report in the local newspaper Siang Tai, in which the Governor was quoted as threatening to use the army to bring order to the increasingly turbulent transport situation at Phuket International Airport.

The Governor has been trying to force through a policy greatly increasing the number of meter taxis allowed to collect passengers from the airport, and giving the taxis their own ticket desk in the arrivals hall.

Arriving at 8:30, the Governor promptly went into meetings with the drivers’ leaders, at which he announced that he had heard from the airport authorities that they were prepared to halve the concession fees currently levied on limousine drivers.

This failed to placate the drivers, however. “We are against the setting-up of a meter taxi counter in the airport terminal – and at every beach on Phuket [as poposed by the Governor] – as this will greatly increase the number of meter taxis,” Manod Chusak, who runs the limousine counters at the airport, told Gov Udomsak.

“We don’t want the number of meter taxis to increase because that will have a direct effect on our livelihood.”

Three hours of discussions, from 8:30 to 11:30, failed to calm the angry mob outside the Provincial Hall and, when the Governor emerged from the building to go for lunch, the crowd blocked his car and security staff had to protect him from drivers who appeared to be about to push him around.

Using a megaphone, the Governor pleaded with the drivers for two hours. He made no concessions but eventually, at 1:30 pm, the drivers went away, vowing to return next Friday at 2 pm, and in greater force, for another round of talks, or confrontation, as the case may be.

Tennis ace Vijay due in Phuket