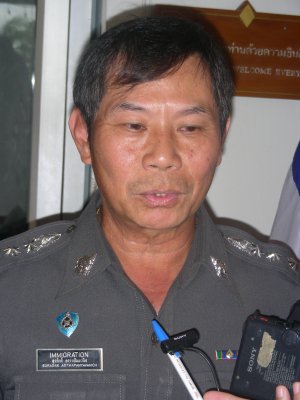 But the Immigration chief defended his officer’s actions and said he would refer the matter to his superiors before taking any action.

The meeting, at the Governor’s Office at Phuket Provincial Hall today, followed an official complaint by the Republic of Korea Embassy to the Tourism Authority of Thailand, who were represented at the meeting by Suwalai Pinpradup, head of its South Region 4 Office in Phuket.

At the meeting Gov Udomsak told Pol Col Surasak Adthapanyavanich, who heads the Immigration unit at the airport, that he thought the officer in question, Pol Capt Chuchat Petngam, had gone too far in denying entry to the two Koreans, who were forced to fly all the way back to Korea.

“Even though he had the authority to do that, I think he displayed bad judgment and should be reassigned to a position outside Phuket,” said the Governor.

But Col Surasak defended Capt Chuchat, saying that his actions were reasonable under the circumstances.

“He was acting within his authority. In fact we sent back 10 Korean tourists last year under similar circumstances. In those cases, none of them complained so it didn’t become a big issue. In this case, I think the two tourists involved have to accept that it was their own behavior that resulted in their being barred, because they refused to follow our procedures,” he said.

The two Koreans in question arrived at the passport control area speaking loudly, which caused them to miss some of the Immigration officer’s instructions. After this they reacted with anger at the officer in charge,” he said.

“Such behavior gives an Immigration officer sufficient reason to deny them entry under Section 12(7) of Thai Immigration Law,” he said.

Col Surasak added that Immigration officers at the airport were overworked.

Col Surasak said he understood that the Governor wants to ensure the continued success of Phuket’s post-tsunami recovery by making the island open to as many tourists as possible, but said that Immigration officers have to consider security issues as well.

“We have to screen tourists as a matter of security, not just for Phuket but for the entire country. If tourists arrive here acting rudely and are unwilling to comply with basic entry procedures, then we must view them as a risk. In any event, I will refer this case to my Commander and let him decide what action, if any, would be fair to take against Capt Chuchat.”