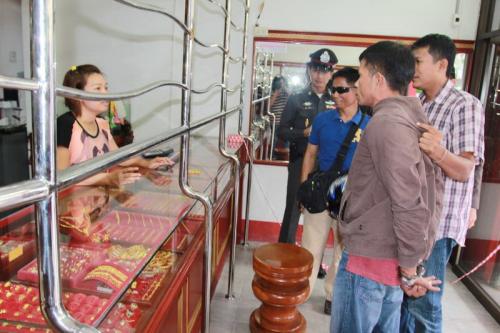 PHUKET: With millions of baht worth of gold being snatched from Phuket gold shops over the last year, Phuket police and gold shop owners joined together for a gold shop crime drill earlier this week.

“The recent increase in the number of gold shops and supermarket robberies has made it necessary for shop owners and police to know exactly what to do in these scenarios,” said Phuket Provincial Police Commander Choti Chavalviwat.

Though Cherng Talay Police station is the first station on the island to conduct a gold shop crime drill, Maj Gen Choti has ordered all police stations across the island to run through the drill and be prepared.

The drill scenario had a single individual snatch a gold chain from Aun Heng Gold Shop in Cherng Talay before jumping on to his motorbike and speeding away, explained Cherng Talay Police Superintendent Chanuchan Cholsuwat.

“The shop owner then made a report to police and described the robber,” Col Chanuchan said. “After receiving the report, police surrounded the suspect and were able to place him under arrest within about 20 minutes.”

Aun Heng Gold Shop owner, Kanjana Tanthong, said the drill boosted her confidence in the ability of police to quickly and effectively deal with a gold shop robbery when it happens next.

“I learned how to prepare myself and my staff for a robbery, and am more confident that the police will handle the crime well,” Ms Kanjana said.

The most important thing for gold shop owners to do is observe the thief carefully, and remember his skin color, face, hair, what he is wearing and also details about his vehicle, Col Chanuchan said.

“Don’t be nervous, just focus on the details,” he said.

According to police, every gold shop should have CCTV cameras, bars separating their merchandise from the public and a silent emergency alarm that connects directly to the police.

“In the event of a robbery, let the thief take whatever he wants,” Col Chanuchan said.

Press the emergency alarm only when it is safe to do so, he added.

The request for all police stations on Phuket to run the gold shop crime drill comes in the wake of a customer being shot dead during a robbery, and police most recently having to cast their net across all of Southern Thailand after fruitless searches for the killer on Phuket (story here).

Islanders look to trek the Elephants after Stallions rein in Phuket

US, South Korean respond to North Korea’s missile over Japan with bombing drills