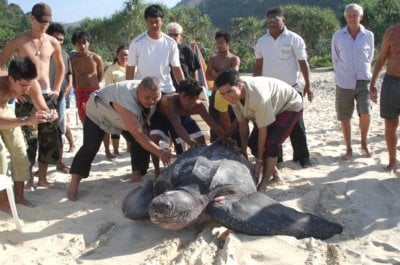 MAI KHAO, PHUKET: In a rare positive development for the critically endangered leatherback sea turtle, an enormous female has laid a clutch of eggs at Mai Khao Beach.

Vigilant staff of the Mai Khao Sea Turtle Conservation Group carefully prodded the sands with a sharp iron bar to discover the eggs on Tuesday night following reports by villagers that a leatherback had come ashore.

It took group members a few hours of searching to find the clutch of 85 eggs, 22 of which were already broken.

The viable eggs were carefully removed and taken to a safer location. Somporn Anopun, a member of the group, said the removal was necessary to protect the eggs from damage or theft.

Mai Khao Village 4 headman Manod Saithong, who is also president of the Sea Turtle Conservation Group, said that it was the first time in years that a clutch had been laid at Mai Khao, which was once famous all over Thailand for its sea turtles.

The weather and condition of the beach need to be just right to attract pregnant females, he said.

“Unlike many people, I am not too worried about light from businesses along the beach and other coastal development projects scaring off the turtles from coming ashore. I am more concerned about the dangers they face at sea from fishing vessels, especially at night,” he said.

Mr Manod was referring to a common method of fishing in Thailand that involves the use of lights suspended overboard from poles to attract squid.

“The turtles are also attracted to the lights, but they get entangled in the nets and die,” he said.

Kongkiet Kittiratanawong, a researcher at the Phuket Marine Biological Center (PMBC), said that females, after laying a clutch of eggs, commonly return to the same area eight to ten days later to lay more eggs. This routine can be repeated several times by a healthy female, he said.

The last report on a leatherback laying eggs in Phuket came in December 2006 at Karon Beach. The 103 eggs were immediately stolen by villagers, but municipal officials convinced them to return them. They were incubated at the PMBC, where about 80 percent hatched about 60 days later.

Dr Kongkiet said PMBC researchers were working with local villagers to incubate the leatherback eggs at Mai Khao, as transporting the eggs to the PMBC at the opposite end of the island would be dangerous.

He said he would recommend the hatchlings be released into the sea as soon as possible after they hatch, rather than raised in captivity.

“I always tell people to do what the turtles want, not what humans want,” he said.

However, for some sea turtle species that feed well in captivity, such as the green sea turtle, chances for survival in the wild increase greatly if they are raised in captivity for about a year, he said.