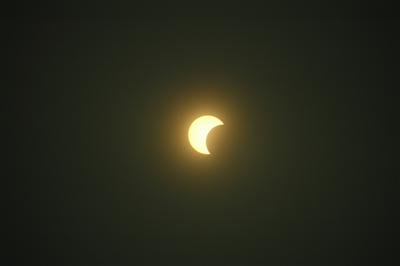 PHUKET: Thanks to clear skies, the partial solar eclipse predicted by astronomers was clearly visible throughout Phuket yesterdday.

The entire event lasted three hours and 34 minutes, with as much as 57 percent of the sun’s surface obscured at its peak at 3:28pm.

Because Phuket is the most westerly province of Thailand, it was the first province in the Kingdom to experience the effects of the eclipse.

A full ‘annular’ eclipse, the first anywhere in the world in 2010, cast a 300km-wide track across parts of Africa and Asia.

Annular eclipses occur when the sun and moon are perfectly aligned, but the size of the moon appears smaller than the sun and a bright ring forms around the periphery.