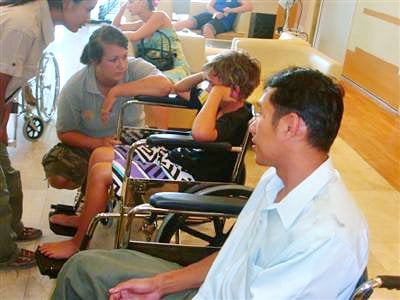 PHUKET: A driver lost control of a jeep full of tourists heading down Big Buddha Hill, killing a 26-year-old Australian man who was on his honeymoon in Phuket.

The deceased’s name is known, but is being withheld pending notification of next of kin.

Several other tourists were injured in the accident, which happened at about 11am this morning. The condition of one of the tourists is considered ‘serious’.

The Thai driver said the brakes failed, causing him to lose control of the vehicle, which flipped over in the accident.

The vehicle was a Land Rover jeep, not a tour bus as had been reported by a local blog.

There were nine tourists in the back of the jeep at the time.

Tori Giles, a member of an Australian family of six who were part of the group, sustained a head injury in the accident.

“I can remember that when the jeep was heading down the hill on the way back, I felt the driver change gear, then there was a bang. After that I can’t remember anything,” he said.

A Safari Tour employee told the Gazette the company had been in operation 17 years.

“We have never had a problem like this before,” he said. “The company will take responsibility and take care of all the tourists who were involved in the accident.”

The injured tourists are being treated at Bangkok Hospital Phuket.

Chalong Police Inspector Col Chana Sudtimas said, “We will have to arrest the driver for causing death by careless driving.

“He may have to spend as much as 10 years in jail, depending on what the judge decides,” he added.