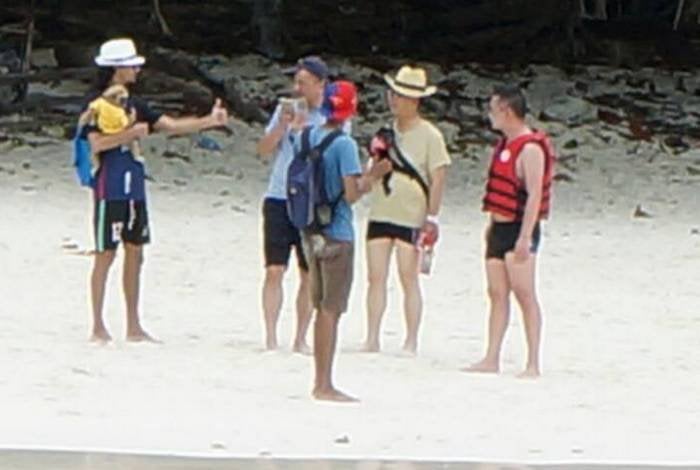 PHUKET: Illegal-gibbon touts returned to Monkey Beach in Phi Phi with the start of the high season, confirmed a Phuket Gazette reader.

Photographic evidence of two men walking the beach and offering to take pictures of tourists holding the gibbons was promptly passed on to officials.

“They are apparently back for high season, because they can earn so much money,” said Suwat Suksiri, chief of the Thung Talay Non Hunting Zone. “They are not afraid of getting arrested.”

With the possibility of making more than 500,000 baht a month during the high season, the maximum punishment of not more than 4,000 baht, four years imprisonment or both is hardly a deterrent, noted Mr Suwat.

“We’ll get out there as soon as the weather clears. However, we will be in touch with national park officers and local police immediately. Hopefully they will be able to take appropriate action right away,” Mr Suwat said.

Mr Suwat explained that according to his office’s files, there are still at least five gibbons, a protected species in Thailand, being held in captivity and used by touts in Phi Phi. The number has fallen from his estimates of about 20 gibbons on the island in August.

Gibbons are generally brought over to Phi Phi from Phuket. These baby gibbons, costing about 25,000 baht each, are sourced from the wild by poachers who take them from their mother. The mother is killed in the process, Mr Suwat explained.

“We are very appreciative of tourists sending in photos. We will inspect Monkey Beach as soon as possible,” Mr Boonname said.