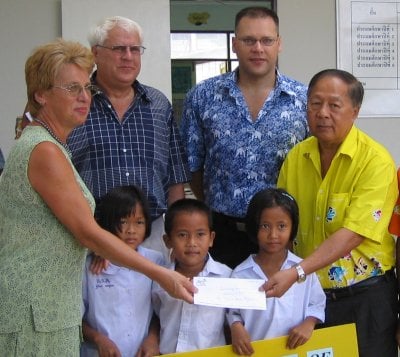 PATONG: The citizens of the small German town of Bad Rappenau – population 20,500 – have donated 1 million baht to help rebuild Baan Kalim School, which was badly damaged by the December 26 tsunami.

On January 28, Heiko Schmidt, owner of Baan Suan Villa in Patong, who is originally from Bad Rappenau, handed over a check in that amount to Damrong Boonchoti, Director of the Phuket Educational Area Office, who is in charge of charity fund established to help the school recover from the disaster.

Mr Schmidt told the Gazette that his family had long supported the school and that, thanks to the generosity of people back home in Bad Rappenau, another million baht was expected soon.

Also in attendance were his parents, Klaus and Marietta Schmidt, who organized the collection effort back in Germany, and his wife Kalayarat.

K. Damrong thanked the Germans on behalf of the school. “We say thank you to you and the people of Bad Rappenau in Germany for your generosity at this time,” he said.