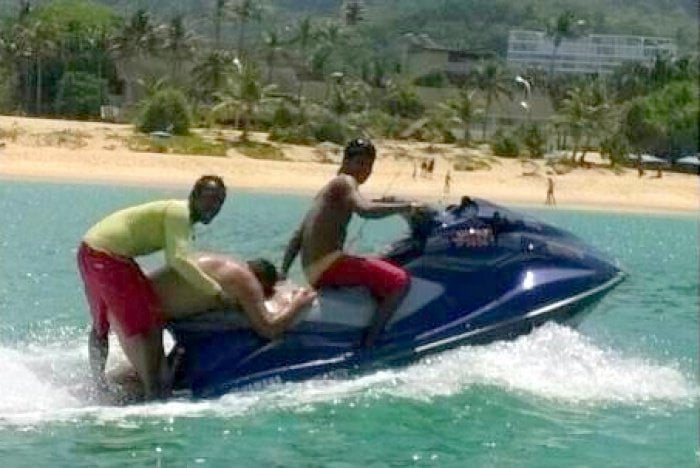 PHUKET: A German tourist who was struck in the head by the propeller of a longtail boat off Karon Beach yesterday morning is now receiving treatment at Bangkok Hospital Phuket.

Kata-Karon chief lifeguard Uten Singsom told the Phuket Gazette today that his staff rescued the tourist, who was swimming about 60 meters from shore.

The man’s name and condition has yet to be released by police or hospital staff.

“The longtail boat driver has yet to be charged. We have called him to present himself at the police station for questioning this afternoon,” he told the Gazette this morning.

However, Mr Uten confirmed that the man was struck in the head by the boat’s propeller at around 10am.

Lifeguards were able to reach the still-conscious man quickly by jet-ski and take him promptly to Patong Hospital.

“He suffered cuts to the head, but I did not see them myself. I called Patong Hospital and learned that at least one of the cuts was deep into the skull,” Mr Uten told the Gazette.

“The man was later transferred to Bangkok Hospital Phuket and is now receiving treatment there. I wish him a quick recovery.”

Phuket’s Lighthouse Weekend Market returns with a taste of Fantasia