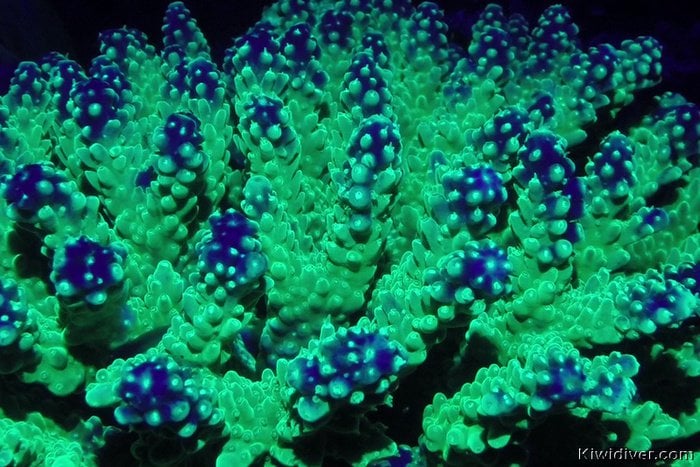 PHUKET: Most divers remember taking a crash course in the color spectrum and light waves from their advanced diving course. Notably, that we see short wavelength colors, such as red, yellow and orange, quickly disappear as we descend on a dive. The lesson is usually combined with a color-comparisons activity on our first deep dive to about 30* meters.

There is, of course, an entire world of light beyond what we can see.

Pounding across Kata Beach with a quarter moon overhead, we are about to shine the light of discovery and see what it does to the underwater world during a “Glow Dive” with Vince from Kiwidiver. Glow dives, also known as Glo dives and Flo dives, are new to the diving market, as the technology for ultraviolet (UV) and blue-light torches for divers have just recently become commercially available.

There are two distinct types of glow dives: one with UV torches, which shine light at a wavelength that is invisible to the human eye (395 nanometers); and blue light, which shines a strong blue light of about 455nm, and still resides in the visible spectrum.

As we swim out among the longtail boats anchored at the north end of the beach, Vince explains that we will be using a UV torch, as a blue-light torch requires divers to wear yellow filters (and fit their cameras with the same) in order to see the magic. Of course, Kata is loaded with biological wonders that aren’t UV magical, so we are all carrying good old-fashioned LED torches as well.

As we approach the edge of the reef, it’s possible to hear Vince clicking his torch over to UV mode. We tuck our own torches away.

At first, it’s dark. There is a little moonlight trickling down to the sand and the top of the reef, and a hard wave of the hand causes a burst of bio-luminescent particles to light up like Tinker Bell’s dust. Then, the corals are hit with the light from the UV torch and explode with color – strange colors: neon greens, deep purples and stunning oranges.

They are glowing in the darkness like beacons in a science-fiction movie. Floating close to a small colony of brain coral, the swerving maze-like lines becomes mesmerizing as the tops glow, falling away into black crevices.

The corals are emitting light within the visible spectrum due to a chemical compound contained in their tissue, which reacts to the UV light, causing them to fluoresce. Unfortunately, not everyone is able to be the belle of this rave-like UV ball.

In fact, only certain animals react at all – most notably corals and soft-bodied critters. The rest remain hidden from sight. Though corals provide the most spectacular of the UV-color shows, invertebrates such as jellyfish put on an enamoring display as they pulse through the ocean.

However, without a jellyfish in sight and the glow of the corals giving way to our imaginations wandering about, curious as to what else is out there, Vince shuts off the UV light to continue the dive – only to turn it back on every so often to check what else is willing to glow for us.

Though not so lucky as to find ourselves in a bloom of jellyfish, Vince was able to give us a taste of the wonders that present themselves to torches of the visible-light spectrum: two ornate ghost pipefish, two frog fish and what appeared to be a bumblebee squid (Sepiola atlantica), not to mention an assortment of crustaceans and other marine life that come out to play once the sun goes down.

* The story originally stated that the deep dive was to 40 meters.

Gardening: Tales of the understory