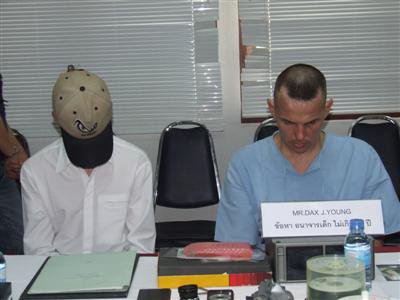 PHUKET CITY: Despite efforts by the German Embassy, a young man arrested on charges of sexually abusing minors remains in detention at the Phuket Juvenile Observation and Protection Center almost three months after his arrest.

The youth, who was just 17 when he was arrested on March 9, recently spent his 18th birthday behind bars.

His arrest, together with that of his alleged co-conspirator Dax Young of Britain, followed an investigation by the Department of Special Investigations (DSI) and Kathu Police.

For previous accounts of the youth’s arrest click here and here .

After he was taken into custody for conspiring with the alleged pedophile to molest young schoolboys in Patong, there has been little progress in the German diplomatic mission’s  efforts to have the youth freed.

The German diplomatic mission in Thailand sees the young man as a victim and not a perpetrator.

“There is no update in the case,” said German Honorary Consul for Phuket Dirk Naumann.

Mr Naumann earlier told the Gazette he was confident the youth was not sexually attracted to boys, but was forced by dire financial circumstances to do the Briton’s bidding as a way of helping his family.

The young man’s mother is seriously ill with chronic respiratory disease. She has required expensive hospital treatment on several occasions since the family moved to Thailand around four years ago.

“I visited the boy last week. He is in good spirits and hoping the Thai prosecutor and police will see it the same way as everyone else, that he is a victim and not a perpetrator,” Mr Naumann said.

“The boy has now got his own lawyer. He is no longer represented by the same lawyer as the British Man [Dax Young],” he added.

The Gazette contacted the Bangkok firm representing the youth, whose Swiss legal advisor said he was unable to comment on the case because it is still under investigation.

The lack of media attention to the three-month detention of a minor comes in stark contrast to the case of Australian housewife Annice Smoel , whose arrest and two-day detention in a Patong jail cell made headlines across the globe.

After confessing to the theft and returning to Melbourne, the mother of four thanked the Australian media for helping to expedite her passage through the normally slow Thai criminal justice system.

Land tax could spur the economy