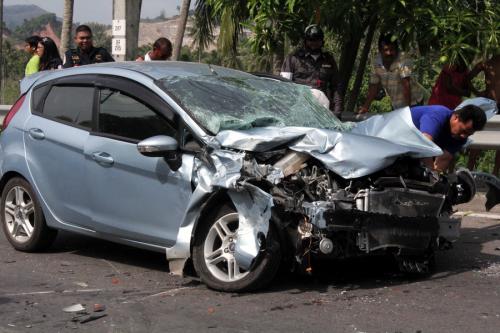 PHUKET AIRPORT: Pol Gen Pracha Promnog was playing his cards close to his chest when he flew into Phuket today, just hours after resigning as Thailand’s Chief of Police amid announcements that he will be appointed Minister of Labor. Chart Pattana leader Korn Dabbarangsri, who is also a Deputy Prime Minister, announced on TV that Gen Pracha would be named Labour Minister, but the general was guarded in his response when asked by the Gazette to confirm whether this was true. Arriving in Phuket for a meeting with the Inspector General of the Malaysian Police, Tan Sri Norian Mai, he would say only, “It is too early to answer this question because I just decided to resign last night. “I have served in the position [of police chief] for four years now, so it was about time to give a chance to the others.” He added that he had never had any problems with former Interior Minister Sanan Kachornprasat, his successor Banyat Bantahthan, or Prime Minister Chuan Leekpai, all of whom are members of the Democrat Party. “We have a good relationship and have worked very smoothly together,” he said. “Prime Minister Chuan Leekpai has always understood and supported the Royal Thai Police. “I don’t want to say anything about [the new post] at this point because there are still a lot of steps that have to be taken care of.” When asked if he would join the Chart Pattana Party, Gen Pracha simply laughed. The cabinet reshuffle is expected to take place soon, following the resignation of Chart Pattana member Pavena Hongsakul who last week stepped down as minister responsible for tourism in order to run for Governor of Bangkok. Korn said Adisai Bhotaramik, Chart Pattana’s deputy leader, would take the tourism slot while the current Labour Minister, Wut Sukosol, will step down from the cabinet, making way for Gen Pracha. Political pundits believe that Chart Pattana wants the popular Gen Pracha on its slate in time for the general election toward the end of this year because of his reputation for fairness.