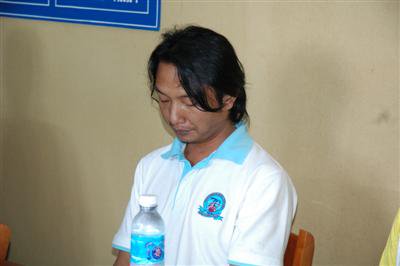 PHUKET CITY: Ekawood Pipatratana, the video game center owner who accidentally shot and killed a 12-year-old boy in his shop on Wednesday, handed himself in to police today.

Mr Ekawood, 43, dumped Amornthep “Gaga” Panya-sirikul’s body in marshland near Phuket International Airport before fleeing in his car to his wife in Bangkok.

At a press conference at Phuket City Police Station at noon today, Mr Ekawood appeared full of remorse for the accident.

“I feel very sorry about what happened. I knew the boy very well and I didn’t mean to take his life,” he said.

He bought the .38 caliber pistol used in the shooting from a Burmese laborer, he said.

The reason he drove off with Amornthep’s body and dumped it was that he was in a state of shock, he explained.

He declined to elaborate further on the events of that day, saying he would wait for his day in court to explain himself.

Mr Sommit brought the couple to Phuket Provincial Police Station at around 11am, fearing that they would be met by a lynch mob if delivered to Cherng Talay Police Station.

Governor Wichai Phraisa-ngop said that the case shed light on a number of important issues, including the dangers posed by foreign laborers who smuggle weapons into Phuket.

Gov Wichai also questioned how Mr Ekawood was able to drive off the island without being stopped by police.

“There’s only one way to drive out of Phuket, and that’s through Tah Chat Chai checkpoint. We really need to fix this problem,” he said.

This is not the first time Mr Sommit has been involved in a controversial police investigation in Cherng Talay.

On March 17 he accompanied his nephew, Lunglode Suepsin, when he turned himself in to Cherng Talay police on an assault charge.

The police handling of that case provoked a 20-hour blockade of the Kamala-Patong Road.

For the original report of that case click here.