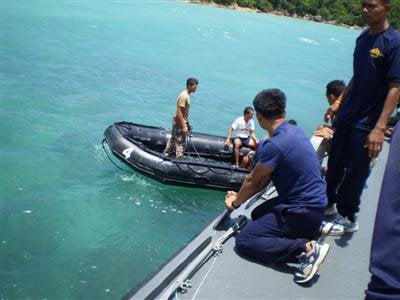 PHUKET CITY: A team of frogmen yesterday sealed a hole in the tank of a sunken fishing vessel off Satun’s Koh Lipe, stopping an oil leak that left some island beaches blackened earlier in the week.

The oil leak was first noticed early last Saturday morning at Ao Pramong, on the north coast of Koh Lipe.

In an all-day operation yesterday, ten teams of two divers each managed to survey the wreck of the 70-meter vessel.

After finding the source of the leak, a one-inch diameter hole where a bolt had come undone, they inserted a plug to temporarily stop the leak.

Frogmen also collected pure samples of the oil, which was originally thought to be bunker oil but now appears to be motor oil.

The vessel originally sunk about 14 years ago some two kilometers off Koh Lipe.

The second of two efforts to salvage the ship by its owner were halted years ago when Tarutao National Park ordered they could not drag the ship over coral beds off Koh Lipe.

As a result, the vessel was left at a location about half a kilometer offshore from a part of the island known as Pattaya Bay, where it now sits at a depth of 42 meters.

The vessel, now itself covered with coral, lies tilted and with its bow pointing towards the island.

A special committee chaired by Satun Vice Governor Chuangchai Pao-in is now looking at ways to keep more oil from leaking from the vessel.

The boat was originally designed as a cargo ship but was later modified to serve as a trawler with the capacity to process catch into fishmeal while at sea.

V/Gov Chaungchai said the committee is considering two options to prevent leaking in the short term.

Both require obtaining the plans of the ship from its original owner to determine the exact size and location of the oil tank.

The first option would be to permanently seal the tank.

The second would be to pump the oil to the surface, where it would be collected and disposed of.

Such an operation would carry the risk of more leakage or even a larger rupture, so sorbent booms and other control measures would need to be put in place in advance.

Divers yesterday were unable to delineate the exact configuration of the tank or estimate how much oil it might still contain. The tank assembly is thought to have a total capacity of 60,000 liters.

A more long-term solution would be a complete salvage operation, but this would require both permission and funding approval from the National Resources and Environment Minister, V/Gov Chaungchai said.

Such an operation might damage coral in the area, so steps would have to be taken to minimize any such damage, he added.

In recent days, winds and currents have carried the oil away from the island and heavy seas have begun to break up the slick into globules.

Heavy surf has also largely cleaned the beaches of oil, though the smell of oil persists, it was reported.