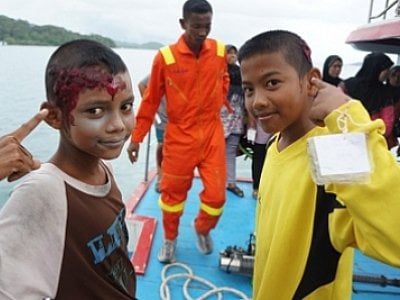 PHUKET: Two tourists on holiday from Vietnam panicked after witnessing the full-scale tsunami rescue drill being conducted off the east coast of Phuket this afternoon.

“Oh my God! My friend and I thought it was some kind of terrorist attack or that a really big accident had happened. We had no clues it was a drill.” said Ms Julie as she attempted to calm down after learning that the emergency unfolding before her eyes was just an exercise.

While talking to the Phuket Gazette, Ms Julie was confronted with bloody victims suffering massive head wounds being carried on stretchers and the wailing sirens of ambulances whizzing by.

“We were on the other side and we saw so many ambulances coming to the pier. We were freaking out and we rode our motorbike here to see what was happening,” she said.

Julie, who declined to give her full name, explained to the Gazette that she and her boyfriend had recently arrived on the island on holiday from Vietnam.

“Thank God it was just a drill. Now, we feel so much better,” she said.

“This is our first time in Phuket. As we saw, you have all this prepared, we feel safe and we will come back in the future for sure,” she added.

Silapachai Suwan, the officer from the Department of Disaster Prevention and Mitigation (DDPM) Pa Khlok office who devised the drill, told the Gazette, “The drill today was impressive. The agencies who took part were well coordinated, as planned.”

Mr Silapachai said that the exercise began with the sounding of the tsunami warning and the evacuation of people in the area to a designated safe zone.

“After this, we started the second part of the exercise, during which we rescued people trapped on board a boat that had an engine fire because the skipper tried leaving Phuket too quickly after hearing the tsunami siren,” explained Mr Silapachai.

In the simulation, longtail boats in the area tried to assist in extinguishing the blaze. After they failed to put out the fire, emergency service agencies on the island responded to a call for help.

“I would like to thank all the emergency services. The exercise was held in driving rain, but everyone played their part as planned. In a real situation, we would not stop our mission just because of rain,” he said.

Asked what had been done to warn the public that the exercise was going to be held, Mr Silapachai responded, “We had messages broadcast on community radio and send letters to relevant government departments.

“We did not put up any signs to inform tourists about the drill,” he said.