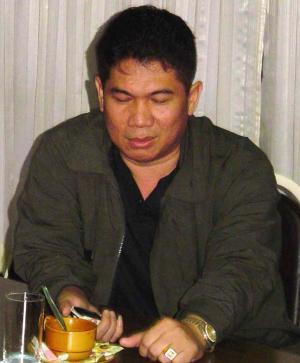 RANONG (Kom Chad Luek): Fugitive land official Bunchoo Limraksasin was arrested yesterday evening in Ranong province after returning from the Andaman Club hotel and casino on Koh Son, Burma, where, police said, he had been hiding since last Friday. Bunchoo is the second wanted land official to be caught, following the arrest of Uru Thipthep on July 13. A third, former provincial land registrar Thawatchai Anukul, is still on the run. Bunchoo was spotted on Koh Son yesterday, and plainclothes Crime Suppression police were sent to the island to keep an eye on him. When he boarded a ferry for Ranong yesterday evening, they followed, alerting a large reception committee at the other end who placed him under arrest on arrival. Bunchoo told the police that he didn’t know a warrant had been issued for his arrest until he saw newspaper reports about himself. He explained that he had gone to Koh Son because he was not well and wanted to relax, but that he fully intended to surrender to police. He declined to comment further. “I will talk to the judge,” he told reporters. “Then everyone will know what the truth is.” Today Bunchoo was flown to Bangkok for interrogation at the Crime Suppression headquarters.