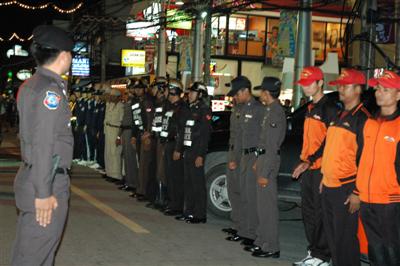 Acting on a tipoff, Kathu Police Inspector for Investigations Sakol Bunditsak at 3:30am led a special investigation unit on a successful raid of the Top Relax bar, located at 2/1 Phang Muang Road.

Of the 15 people arrested, most were French nationals playing poker for stakes reportedly “in the millions of baht”.

However, only 9,500 baht in cash was seized as evidence, along with decks of cards, poker chips and other gambling-related items.

One of the two women reportedly ran the mini-casino, set up in a small room equipped with closed circuit television cameras for security.

The games were reportedly held on Saturday and Sunday nights by the Frenchmen, who were described as businessmen.

One Portuguese national was also taken into custody.

In a typical month, charges related to gambling lead all other categories of crime except illegal drug use, according to statistics released by the Phuket Provincial Police.

In February this year, there were 65 gambling cases, a 20% increase year-on-year, with 249 people arrested for the offenses.

The vast majority of arrests for gambling usually involve Thai nationals, and reports of foreigners being arrested in such high-stakes games are very uncommon.