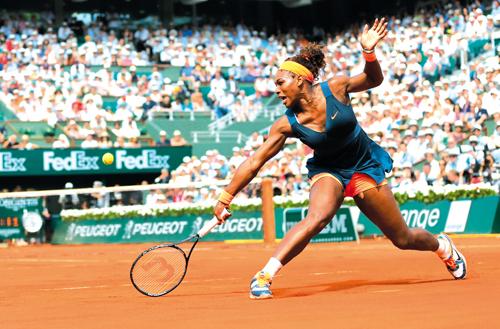 PHUKET: When Serena Williams powered down three aces in the final game to beat Maria Sharapova 6-4, 6-4 at Stade Roland Garros, she cemented her already legendary status in the game. The oldest winner – at 31 – of a Grand Slam in the modern era, the victory was, coincidentally, her 31st straight success. She has now won every Major at least twice, and is not only the current world number one, but arguably the greatest female player of all time.

And this despite a career-threatening injury to her foot, a rare blood disease, a game better suited to the faster surfaces of other major tournaments and a fragile temperament. After her win she confessed: “At that point [the final game] I was just so nervous [thinking] I’m not going to be able to hit ground strokes.”

Maria Sharapova will have taken scant consolation from that post-match confession, as she wondered how she could stem the incessant stream of winners.

The twenty-six-year-old Russian hits her ground strokes with almost equivalent ferocity, but her own serve, which cracks under pressure, lacks penetration, and her lack of mobility around the court was ruthlessly exposed by the panther-like Williams. Afterwards, she mused: “You know she’s going to be able to hit a big serve. If I was built like Serena, I hope I’d be able to serve like that too.”

The French Open usually produces its share of upsets, and this year, with blustery conditions and shifts of temperature, proved no exception. In the men’s draw, Jo-Wilfred Tsonga beat Roger Federer to raise Gallic hopes of a first French winner in the Open Era, but he then succumbed meekly to Spain’s David Ferrer, whose consistency off the ground and terrier-like ability to retrieve, have propelled him into the top echelons of the sport.

But the final was in many people’s minds played out in the first semi – between the two best players in the world. Rafa Nadal and Novak Djokovic would have almost certainly have contested an epic final, but were denied by a quirk of seeding: instead they contested the match of the tournament two days earlier. Nadal, eventually triumphed after four hours and 37 minutes of fluctuating drama, taking the fifth set 9-7. Nadal has lost just once in 60 matches on the red clay of Roland Garros, a feat unlikely ever to be matched.

That left Ferrer to confront his nemesis in his first ever Grand Slam final (his record against Nadal is 4 wins from 23 matches). He played with great heart and was, as always, remarkably consistent off the ground. But Nadal was in imperious mood, seemingly hitting the lines at will, and ignoring the rainy conditions and interruptions from protesters. He duly completed a straight sets win (6-3, 6-2, 6-3). His eighth French Open title. Yet another record. Like Serena Williams, his claims to sporting greatness are indisputable.

Ferrer was philosophical in defeat, admitting: “He has more power than me with his shots”, adding, “I need to play more aggressive … to finish more points at the net.” Easier said than done.

Wimbledon now awaits – with only Novak Djokovic likely to stand in the way of the rampant Rafael Nadal.