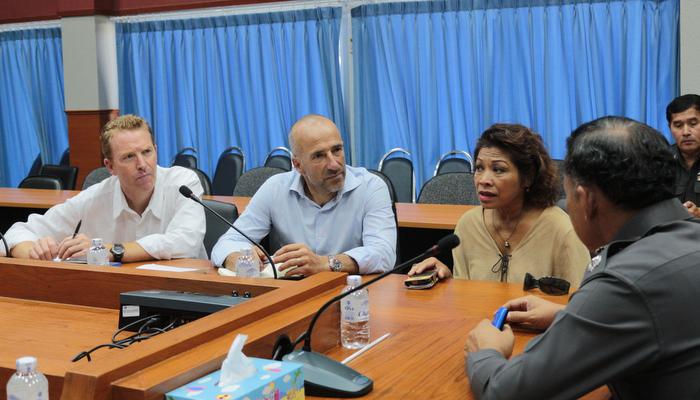 PHUKET: Officers from the French Embassy are pushing for justice for Frenchman Fabrice Boigel, who was murdered in his sleep on April 18. Embassy officials met with Phuket’s top police officers yesterday to urge them to apprehend the prime suspect.

Myanmar national Shwe Oo was arrested last Saturday and confessed to stealing from the murdered Frenchman (story here), but blamed his accomplice Maung Myo for the killing.

“The French Embassy is impressed that police were able to quickly arrest one of the suspects. However, we want to see the Phuket Police arrest the other suspect as soon as possible,” said Eric Francelet, Police Liaison for the French Embassy in Thailand.

Phuket Provincial Police Commander Ong-art Phiewruangnont updated the visiting French officials about the progress in the case and assured them that they would find and arrest Mr Maung soon.

“Police are searching diligently for Mr Maung. We are questioning anyone who might have information about him or his whereabouts,” said Maj Gen Ong-art.

“We believe we will be able to make an arrest very soon.”

The French Embassy also took the opportunity to thank the Phuket Police for their hard work and presented them with a plaque to express their gratitude.

“On behalf of the embassy, I present this plaque and letter of thanks to Phuket Police officers for bringing swift justice to one of the men who killed Mr Boigeol,” said Mr Francelet.

“We hope that the police will continue to do good work.”

Mr Francelet also relayed his embassy’s support for Phuket Police if they apprehend any French nationals committing crimes in Phuket.

“If anyone of French nationality is found causing problems, we fully support Thai police in prosecuting those individuals. We do not want French people committing crimes in Thailand,” said Mr Francelet.

“We know that crimes are committed all over the world by all different nationalities, including in France. It does not just happen here.”

Phuket pawnshop bolstered with B130mn as students head back to school